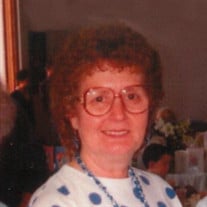 Pearl Vanderwilt, 91, of Oskaloosa, died Tuesday, December 7, 2021, at Mahaska Health in Oskaloosa, Iowa. Pearl Pauline Vanderwilt, daughter of Oscar Wellington and Annie Opal (Nofsger) Orfield, was born August 2, 1930, in her parents' rural home near Corydon, Iowa. As a youngster, the family moved to the Eddyville area, where she began school. It was miraculous that Pearl survived her childhood, having smallpox and an appendectomy before the advent of antibiotics. The family moved back to the Wayne County area, and Pearl finished high school in Allerton. Through her sister, Ruby, Pearl met Morgan Chester Vanderwilt the summer before her senior year in high school. They married, November 25, 1948, in Missouri. Chester was working in Oskaloosa, so they decided Pearl would attend school in Allerton during the week and visit Chet on the weekends until after graduation. After finishing high school, she and Chet moved to a farm near Leighton, where they helped his father raise turkeys. Their first home was in a renovated caboose. They soon moved into Oskaloosa, and in 1962, Pearl was hired in the surgery department at Mahaska County Hospital. Her training was entirely on the job. To arrive at the hospital at 6 a.m. each morning, Pearl awoke at 3 a.m. to get her sons to the babysitter in Bussey. Maybe her childhood experience with surgery gave her the passion and dedication to become certified for a surgical technician position in the operating room and endurance to remain for more than 30 years. After she retired in 1993, she soon returned to the hospital to work in Central Supply for an additional two years. After her second retirement, she and Chet enjoyed traveling in their 40-foot RV along the Mississippi to Muscatine and Arkansas. They enjoyed attending dog and horse races, and in her spare time, she enjoyed reading and knitting. Her family includes her sons: Morgan Clark (Jacque) Vanderwilt of Oskaloosa, Louis Alan (Carolyn) Vanderwilt of Des Moines, and Jeffrey Ross (Debbie) Vanderwilt of Oskaloosa; a granddaughter, Tammy (Chad) Smith of Missouri; two great-grandchildren: Corey (Braylee) Osterloh and Camron Smith (fiancé, Kelsey Sewell); a great-great-grandchild, Zaylee Osterloh; sisters-in-law, Barb Vanderwilt of Oskaloosa and Kim Vanderwilt of Oskaloosa; several nieces and nephews. In addition to her parents and her husband, Chet, on February 11, 2008, she was preceded in death by her siblings: Opal Bridges, Ruby Van Toorn, Garnet Mitchell, and Floyd Orfield. Funeral services for Pearl will be held at 10:30 a.m., Saturday, December 11, 2021, at Langkamp Funeral Chapel in Oskaloosa, with Pastor Alvern Boetsma officiating. The burial will be in Henness Cemetery. Visitation will begin at 11 a.m., Friday; the family will greet visitors from 4-6 p.m.

The family of Pearl Pauline Vanderwilt created this Life Tributes page to make it easy to share your memories.

Send flowers to the Vanderwilt family.