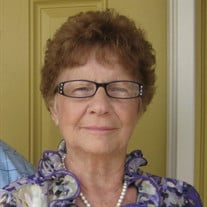 Peggy Walker, 80, of Oskaloosa, passed away Saturday, May 1, 2021, at home surrounded by her family. Peggy Jo Walker, daughter of John Abram and Mae (Vangilder) Bakalar, was born December 15, 1940, in Hiteman, Iowa. Peggy attended Albia Schools through the 8th Grade. At the age of 14, Peggy left home and moved in with her sister Mary in Des Moines, Iowa. She began waitressing at a local restaurant. At the age of 17, Peggy and her friend decided to go on a double-blind date. This seemingly simple activity had a lasting impact on Peggy’s life, as it led to her being introduced to her future husband, Earl Walker. Earl took one look at Peggy and knew that she was the one for him. Peggy and Earl were engaged three months later, and married on July 26, 1958 in Newton, Iowa. The couple resided in Oskaloosa and Peggy began working at Big Smith’s Overall Factory. Peggy and Earl had four children, and in 1964 the family moved to Albia, Iowa, where Peggy and Earl bought a family farm and began farming. In 1972 the family moved back to Oskaloosa, where they purchased another family farm, from Earl’s parents. It was at this time that Peggy went to work for Pella Corp and stay there for 10 years until 1982 when she went to work for Paslode in Oskaloosa. She stayed with Paslode until her retirement in 2003. Peggy was an avid flower lover and bird watcher. She was also a very skilled seamstress. Peggy’s true love was her family, she always made time for them and would enjoy a boat ride and fishing trip with Earl, as long as there were no snakes in the boat. Peggy’s family includes her children: Tammie Walker (David Hodges), Steve Walker, Doug (Melissa) Walker all of Oskaloosa, and Melinda (Douglas) Piper of Chariton, IA; 11 grandchildren, 14 great-grandchildren and 1 great-grandchild on the way, 16 brothers and sisters and many nieces and nephews. Peggy was preceded in death by her parents, her husband Earl, a grandson, Jeordan Piper, a great-grandson Maddox VanKooten and 13 of her brothers and sisters. Peggy’s memorial services will be held at 10:30 a.m., Thursday, May 6, 2021, at Grace Lutheran Church in Oskaloosa, with Pastor Roger Neuman officiating. Burial will be in Forest Cemetery Cemetery. Visitation will begin at 11 a.m., Wednesday; the family will greet visitors from 5-7 p.m., Wednesday evening. Memorial contributions can be made to the Grace Lutheran Church. As were Peggy’s wishes, her body has been cremated. According to the rules put in place by the Iowa Department of Public Health, proper social distancing and appropriate personal protective equipment are advised for attending these public events.

The family of Peggy Jo Walker created this Life Tributes page to make it easy to share your memories.

Send flowers to the Walker family.