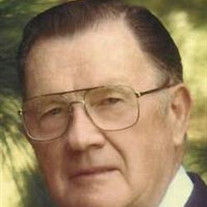 Philip Claire Wake: Phil passed away early Thursday morning at Mahaska Hospital at the age of 88 years, 9 months and 9 days. Phil enjoyed his family and the many summers they spent boating & fishing on Rush Lake, MN and in Canada; he loved traveling and following his retirement, he and Madelyn spent many years wintering in Florida. Phil also enjoyed the simple things in life, like Louis L'Amour novels, watching sports, meeting friends at the Elks and traveling to the Mesqwakie Casino. He was a member & elder of the First Presbyterian Church. He was also a member of the American Legion. Philip Claire Wake, son of James Hearst & Avis Thelma White Wake was born Sept. 17, 1914 in Oskaloosa. He was a 1932 graduate of Oskaloosa High School. He began his career in Burlington IA, where he served as a regional sales manager, selling flour in S.E. Iowa. On Oct. 15, 1936, he and Madelyn V. Giefer were married in Columbia, MO; that same year he began working with his father at J.H. Wake Feed Mill. On May 5, 1944, he enlisted in the United States Marine Corps; he mainly served on a flight crew that flew supplies in and the wounded out of the South Pacific during WWII. After his discharge on Dec. 26, 1945, he went back to work, as a partner with his father, at J.H. Wake Feed Mill. He continued management of the business, until his retirement in the late 70's. Phil had a passion for agriculture, and what it represented to the country; he felt it was the most basic industry and knew its impact in feeding the world. He was the first recipient of the Iowa Agr. Businessman of the Year in 1973, award by the I.S.U. Ag. Business Club. Phil also had a passion for his community; as evidenced by his service on numerous boards, they included: Oskaloosa City Council, the Water Board, Chamber of Commerce Board, YMCA Board, William Penn College Board of Trustees, a charter Member of Indian Hills Community College Board, Forest Cemetery Board, the Mahaska State Bank Board for over 23 years and the Mahaska Investment Company Board for over 17 years. Phil's memory is honored by his daughter, Sally Munsell; his son & daughter-in-law, James G. & Jayne Wake, all of Oskaloosa. He was blessed with eight grandchildren and their spouses: Michael (Mary) Freeman of Sergeant Bluff, IA; Kenneth (Laura) Freeman of Kansas City, MO; William (Linda) Freeman of Olathe, KS; Douglas (Rhonda) Freeman of Overland Park, KS; Damon Wake of Phoenix, AZ; Leigh Ann (Dino) Whipple of West Des Moines; Joshua (Dana) Bandstra of Oskaloosa and Jessica Bandstra and her fiancée, Brandon Blommers of Shawnee, KS. He was also blessed with 17 great grandchildren. A sister-in-law, Frankie (Leonard) Franklin of St. Paul Park, MN, survives him. PDF Printable Version

Philip Claire Wake: Phil passed away early Thursday morning at Mahaska Hospital at the age of 88 years, 9 months and 9 days. Phil enjoyed his family and the many summers they spent boating & fishing on Rush Lake, MN and in Canada; he loved... View Obituary & Service Information

The family of Philip Claire Wake created this Life Tributes page to make it easy to share your memories.

Send flowers to the Wake family.