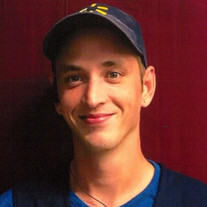 Phillip Ward Jr., 28, of Oskaloosa, passed away Tuesday December 10, 2019, in Oskaloosa, Iowa. Phillip Austin Ward Jr., son of Phillip A. Ward and Dreama G. Williams, was born, May 16, 1991, in Charleston, WV. He grew up and attended school in Logan, WV. Phillip graduated with the class of 2009 from the Logan Senior High School. Following his education, Phil moved to Florida for a short time before moving to Iowa. While in Iowa, Phil began his career with Wal-Mart and became manager of the lawn and garden department. While in Iowa, Phil met LeeAnne Russell and the two were the perfect match together. Phil and LeeAnne were engaged to be married. Phillip loved his children with all his heart. Phillip enjoyed playing disc golf and video games, but his real passion was his kids. He loved to take Laney to beauty pageants, taking all the kids to adventure parks and introducing them to rollercoasters, a personal favorite of Phil's. His family includes his fiancée, LeeAnn Russell of Oskaloosa; his three daughters, Kaylynn, Arianna, and Laney Ward; his father and step-mother, Phillip (Jill) Ward of Whitman, WV; his mother and step-father, Dreama (Fred) Williams of St. Cloud, FL; three sisters Jamie Meade of Logan, WV, Brittany (Chard) Simpkins of Switzer, WV, and Alexis Ward of Whitman, WV; one brother Danny Crum of Logan, WV and many nieces and nephews. Phil was preceded in death by a twin brother Robert Ward and his paternal grandmother Carol Davis. As was Phil’s wish, his body will be cremated. A memorial service will be held at a later date. Memorial contributions can be made in his name.

The family of Phillip Austin Ward Jr. created this Life Tributes page to make it easy to share your memories.

Send flowers to the Ward family.