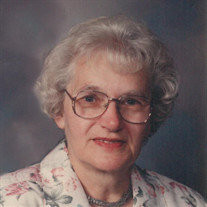 Phyllis Fry, 88, of Beacon passed away Wednesday morning, June 6, 2018, at the Mahaska Health Partnership in Oskaloosa, Iowa. Phyllis Colleen Margaret Fry, daughter of Jesse G. and Bertha Theresa (Piper) McDonough, was born September 5, 1929, at the home of her parents in Lacey, Iowa. The youngest of six children, Phyllis attended Lacey school where she played on the basketball team. Phyllis was a 1948 graduate of Lacey High school. She married David Peter Fry, Dec. 22, 1950, in Oskaloosa and they made their first home in New Sharon, where David worked as an auto-mechanic. They moved to Beacon in 1954 and she has lived there ever since. Since moving to Beacon, Phyllis was an active member of the Beacon United Methodist Church. Phyllis worked at Star Realty in Oskaloosa and later also worked as postmaster replacement at the Beacon Post Office until 2010. She was an avid reader and enjoyed fishing as well. Phyllis’s family was always her first priority, she loved caring for them and took great pride in her grandsons, who she spent many hours babysitting. Her family includes her daughter and son-in-law, Beth and Steve Bagby of Oskaloosa; and son, Bruce Fry of Albuquerque, NM; twin grandsons: Kirk Bagby and David (Sarah) Bagby, both of Jackson, KY; and several nieces and nephews. In addition to her parents, Phyllis was preceded in death by her husband, David of 66 years; a daughter, Teresa; four brothers: Max, Elvin, Paul and Loren McDonough; and a sister, Georgena Wright. Funeral Services for Phyllis will be held at 10 a.m., Saturday, June 9, 2018, at Langkamp Funeral Chapel with the Reverend Steve Bagby officiating. Burial will be in Forest Cemetery. Visitation will begin at 11 a.m., Friday; the family will greet visitors from 5-7 p.m. Friday evening. Memorial contributions can be made to the Beacon United Methodist Church or the Kentucky Mountain Bible College in support of her grandsons’ ministry in Eastern Kentucky.

The family of Phyliis Fry created this Life Tributes page to make it easy to share your memories.