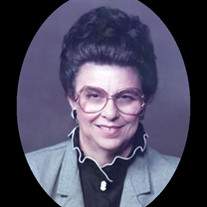 Phyllis Fryer, 86, of Oskaloosa, Iowa passed away Saturday, December 22, 2018, at the Mahaska Health Hospice Serenity House in Oskaloosa. Phyllis Jean Cameron was born, July 21, 1932, to Kenneth and Mary (Silvers) Cameron. She attended school in Beacon and graduated from Oskaloosa High School in 1949. She married Dwight Fryer August 14, 1949, in Oskaloosa. Phyllis was a hard worker all of her life, whether it was at the counter at Woolworth’s, the overall factory, milking cows, or gathering eggs on the farm. On July 22, 1972, she was baptized as one of Jehovah’s Witnesses. She dedicated many hours to sharing the promises for the future held out in the Bible. She is survived by her husband of over 69 years, Dwight; her three children: Vicky (Ronald) Rohlfsen of West Plains, MO, Danny (Diane) Fryer, and Robyn (Randy) Sayre, both of Oskaloosa; her five grandchildren: Bryan (Mandi) Rohlfsen of West Plaines, MO, Jennifer (Paul) Resczenko of Oskaloosa, Curtis (Erin) Rohlfsen of Wallkill, NY, Joshua (Heather) Fryer of Port au Prince, Haiti, and Kara (Jonathan) Vance of Oskaloosa; her siblings: Shirley (Gerald) Boomershine and Mike Cameron, both of Oskaloosa; and a sister-in-law, Patricia Cameron of Delta. In addition to her parents, she was preceded in death by a brother, Kenny Cameron. A memorial service will be held at 11 a.m., Wednesday, December 26, 2018, at The Kingdom Hall of the Jehovah’s Witnesses with Sam Brown officiating. The family will greet visitors from 10 a.m. to service time on Wednesday morning. Private interment will be held at Bellefountain Cemetery near Tracy, IA. Memorials can be made to The Kingdom Hall of the Jehovah’s Witnesses. Langkamp Funeral Chapel is entrusted with the arrangements.

The family of Phyllis Jean Fryer created this Life Tributes page to make it easy to share your memories.

Send flowers to the Fryer family.