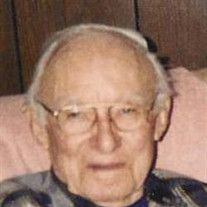 Ralph Towns Gilchrist: Ralph passed away early Thursday morning at Mahaska Hospital at the age of 87 years, 6 months and 27 days. Ralph is survived by his nieces & a nephew: Bette and her husband, Gary Rotert of Vernon Hills, IL; Barbara Gilchrist and her partner, Betsy Miller of St. Louis, MO; and Roger and his wife, Mary Ann Gilchrist of Wichita, KS; and two sisters-in-law: Dorothy and her husband, Don Denney and Geraldine Gilchrist, both of Oskaloosa. Ralph Towns Gilchrist, son of Edward & Grace Boggess Gilchrist born on August 27, 1916 in Oskaloosa. He was a 1932 graduate of Oskaloosa High School. He. served in the U.S. Coast Guard from Oct. 22, 1941 to Dec. 27, 1946 as a Machinist Mate 2nd Class; he was present at Pearl Harbor the day it was bombed, Dec. 7th, 1941. After returning from the service, he returned to the family farm, east of Oskaloosa, which he farmed his entire life, retiring in 1994. He married Nancy Marie Shipley on Jan. 7, 1958 in Perry, IA, she died on May 23, 1997. Ralph enjoyed traveling and dancing with his wife. He attended the Central United Methodist Church and was a 50 year member of the American Legion. Ralph was preceded in death by his parents, his wife, and his brother, William Gilchrist. PDF Printable Version

The family of Ralph Towns Gilchrist created this Life Tributes page to make it easy to share your memories.

Send flowers to the Gilchrist family.