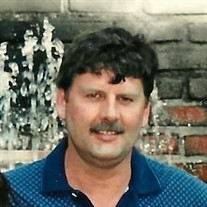 Randy Sedrel, 63, of Oskaloosa passed away Saturday, March 30, 2019, at the University of Iowa Hospitals and Clinics in Iowa City, Iowa. Randal Bruce Sedrel, son of Bruce H. and Mary Lou (Gable) Sedrel, was born December 28, 1955, in Oskaloosa, Iowa. Randy was a 1974 graduate of Oskaloosa High School; he was a good athlete while in school participating in baseball, basketball, and football. Following his education, Randy worked for his father’s company, Sedrel Construction. He then worked for Colonial Bread for a year before taking a job with Pepsi-Cola as a route truck driver. Randy finished his 15 career with Pepsi as a supervisor in the late 90s before taking a job with LaFrenz Motors as a salesman; he worked there three years before taking a job with Schiebout Tires in Pella as a route manager. Randy stayed with Schiebout Tires until ill health required his retirement. Randy was a member of the YMCA for many years and was also a member of the Y’s Mens Club where he helped sale Christmas trees and maintained the Y Camp at Lake Keomah. He was a life –long member of the Central United Methodist Church where he served as an usher for many years. Randy enjoyed riding motorcycles, working in his yard, fishing and playing with his grandchildren. Randy married Debbie Lynn (Oliver) Cooley, September 29, 2001, in Oskaloosa. Together they bought property south of Oskaloosa and transformed an old barn into a wonderful celebration venue. Those left to cherish his memory are his wife Debbie Sedrel of Oskaloosa; his mother, Mary Lou Sedrel of Oskaloosa; sisters: Linda (Michael) Witte of Des Moines and Nancy (Michael) Harrison of Muscatine; a brother, Timothy (Kathy) Sedrel of Grimes; step-sons: Greg Cooley of Las Vegas, NV and Jeffrey Cooley of Humble, TX; step-daughters: Allison (William) Rose of Oskaloosa and Deborah Cooley (Shane Van Alst) of Oskaloosa; nieces: Jamie (Matt) Bourne of Minneapolis, MN; Kelsey (Brad) Hodapp of Muscatine, and Maddie Sedrel of Grimes; nephews: Benjamin Witte of Des Moines, Andrew (Sarah) Harrison of Crystal Lake, IL, Corey Sedrel of West Des Moines, Timothy Harrison of Brooklyn, NY, Zachary (Kristyn) Witte of Des Moines and Alex Sedrel of Sandy, UT; and seven great-nieces and one great-nephew. Randy’s father preceded him in death. Memorial Services for Randy will be held at 10:30 a.m., Friday, April 5, 2019, at the Central United Methodist Church with Rev. Bruce Wittern officiating. The family will greet visitors from 9:30 a.m. to service time on Friday morning. Interment will be in Forest Cemetery at 2 p.m., Friday. Langkamp Funeral Chapel & Crematory is handling the arrangements. Memorials can be made to the Bruce Sedrel Y-Day Camp or the Central United Methodist Church.

The family of Randy Sedrel created this Life Tributes page to make it easy to share your memories.

Send flowers to the Sedrel family.