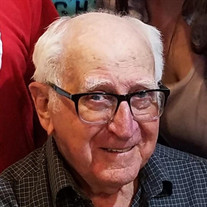 Ray De Zwarte, 94, of Oskaloosa passed away peacefully surrounded by his loving family, Thursday, October 15, 2020, at Mahaska Health in Oskaloosa. Raymond De Zwarte, son of James and Nettie (Verros) De Zwarte, was born September 12, 1926, at the home of his parents near Harvey, Iowa. His love of farming was nurtured throughout his childhood as he grew up helping his dad. He entered the Army in May of 1945 and served in Germany during WWII until he was honorably discharged in 1947. On February 24, 1948, he married Mildred Brummel in Oskaloosa. Together they farmed in the Pella, Harvey, and Eddyville areas. Four children, Sherril Postma, Donna Baitzer, Debra Gray and Richard De Zwarte, were born to this union. Ray officially retired in 1989 but continued to help his son on his farm. With more free time, he became keenly interested in restoring tractors and spent many hours tinkering in his shop. He also enjoyed wood-working and made many items for his family and others. His wood-working skills enabled him to play a vital role at Vacation Bible School at Central Reformed Church; for 15 years, he fashioned each year's craft project's components. Ray also served many terms as deacon and an elder at his church. He created many toys for his grandchildren through the years and enjoyed watching them play with his creations. Ray was a man of honesty and integrity and lived his life by the "Golden Rule." He was happiest when his family surrounded him. His family includes his children and their spouses: Sherril and Bob Postma of Knoxville, Debra and Stan Gray of Murray, and Rick and Diane De Zwarte of Eddyville; ten grandchildren: Rob (Suzanne) Postma of Siren, WI, Shannen (Adam) Cahill of Knoxville, Tyler Baitzer of Des Moines, Emily (Brad) Foss of Kildeer, IL, Kylie (Adam) Wroblaski of Berthoud, CO, Brandon (Laura) Gray of Altoona, Lacey (Dave) Asplund of Austin, TX, Ryan (Kristy) De Zwarte of Oskaloosa, Ashley (James) Hayward of Eddyville, and Cody (Delaney) De Zwarte of Montezuma; 15 great-grandchildren and one great-great-grandson. A sister, Erma Steenhoek of Pella, and a brother, Loren De Zwarte of Knoxville, also survive Ray. In addition to his parents, Ray was preceded in death by his wife, Mildred, on September 20, 2016; a daughter, Donna Baitzer; a brother, Marvin De Zwarte, and a sister, Dorothy Ter Louw. Funeral services for Ray will be held at 10:30 a.m., Monday, October 19, 2020, at Central Reformed Church with Reverend Jon Nelson officiating. According to the rules put in place by the Iowa Department of Public Health, proper social distancing and appropriate personal protective equipment are advised for attending this public event. The family requests that all those attending wear masks. This service can be viewed at livestream.com/centralreformed. Burial will be in Evergreen Cemetery with military honors by the Oskaloosa Honor Guard. Visitation will be held from 10 a.m. to 6 p.m., Sunday at Langkamp Funeral Chapel. Memorial contributions can be made to Central Reformed Church Childrens Ministry Program.

The family of Ray De Zwarte created this Life Tributes page to make it easy to share your memories.