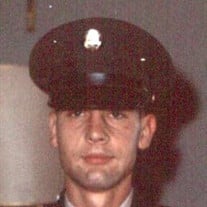 Raymond Brothers, 71, of Oskaloosa passed away Tuesday, September 5, 2017, at the MHP Hospice Serenity House in Oskaloosa. Raymond Walter Brothers, son of Walter and Callie Mae (Parker) Brothers, was born January 24, 1946, in Charleston, South Carolina. After he graduated high school, he worked with his father who was a painting contractor.  In March 1967, Raymond entered the Army. While stationed at Fort Leonard Wood, Missouri, he traveled to Oskaloosa with an army buddy, and it was there that he met his wife, Ronda Kaye Stout.  After a whirlwind romance, they were married September 30, 1970.  Raymond was then stationed in Germany and was discharged in November 1973.  The couple returned to South Carolina where he joined the police force and also worked as a heating and air conditioning technician.  In 1995, Raymond suffered a debilitating stroke, and he was obliged to retire. In 2001, the couple returned to the Oskaloosa area to be near Ronda’s family.  Since retirement, Raymond had enjoyed traveling with his wife and working on his vehicles as he was able. Raymond’s family includes his wife, Ronda of Oskaloosa; a daughter, Betty Mae (Aaron) Brothers-Teston of Walterboro, SC; two granddaughters: Callie and Emma Teston of Walterboro, SC; two sisters: Betty Durr of Summersville, SC and Ruth (Russell) Deloach of N. Charleston, SC; and several nieces and nephews. In addition to his parents, Raymond was preceded in death by two brothers: Appeal Stone and Colman Stone. As was his wish, Raymond's body has been donated to the Des Moines Osteopathic School of Medicine. A graveside memorial service for Raymond will be held at 2 p.m., Saturday, May 18, 2019, at Old White Cemetery in Oskaloosa. Military Honors will be presented by the Oskaloosa Honor Guard. The Family will greet visitors from 12:30 to 1:45 p.m. before the service at Langkamp Funeral Chapel. Memorials may be made to the family or MHP Hospice Serenity House.  Langkamp Funeral Chapel & Crematory has been entrusted with the arrangements.  Memories and condolences can be sent to the family by visiting the online guestbook at gvlfuneralchapel.com.

The family of Raymond Brothers created this Life Tributes page to make it easy to share your memories.

Send flowers to the Brothers family.