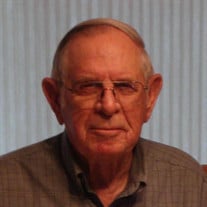 Raymond Meinders, 85, of Oskaloosa, passed away May 7, 2022, at the Mahaska Health Serenity House in Oskaloosa. Raymond Leroy Meinders, son of Tymen H. and Nellie (Slagter) Meinders, was born, April 26, 1937, at Oskaloosa, Iowa. He attended school in Fremont and was a 1954 Pella Christian High School graduate. After his education, he farmed with his father. On June 18, 1959, Ray was married to Janice Ann Veldhuizen at the First Christian Reformed Church in Oskaloosa. They made their home on an acreage just outside Oskaloosa on the Pella Highway. In 1964, Ray started working at Mahaska Farm Service; he held many different positions over the years. He retired from full-time in 2002 but continued to assist part-time through the busy seasons. Ray was a charter member of the Cedar Christian Reformed Church. After moving to Oskaloosa, he became a member of the First Christian Reformed Church, where he served as a deacon and elder of the church council and Young Peoples leader, Cadet leader, and Sunday school teacher. Ray served as a Lincoln Township Trustee for several years. His family includes his two sons and a daughter-in-law: Kevin and Diana Meinders of Pleasant Hill and Brent Meinders of Los Angeles, CA; a daughter and son-in-law, Valerie and Russ Sytsma of Oskaloosa; five grandchildren: Dana Ann (Ron) Robinson of Crystal Lake, IL, Kandis (Nate) Folkert of Largo, FL, Travis Meinders of Boston, MA; Eric (Julie) Sytsma and Joshua (Cally) Sytsma, all of Oskaloosa; eight great-grandchildren: Sophie, Nella and Tymen Robinson of Crystal Lake, IL, Cora Sytsma of Oskaloosa, Lane and William Sytsma of Oskaloosa and Lincoln and Easton Courtney of Oskaloosa. He is also survived by two sisters and brothers-in-law: Eileen (Harold) Van Weelden and Janet (Thomas) Kelderman, all of Oskaloosa. In addition to his parents, Ray was preceded in death by his wife of 54 years, Janice, his parents-in-law, Bill and Nellie (Neels) Veldhuizen, and brothers-in-law, Kenneth D. Malloy and Darryl Veldhuizen, and a sister-in-law, Elaine Malloy. Ray's funeral services will be held at 2 p.m., Tuesday, May 10, 2022, at First Christian Reformed Church in Oskaloosa, with Rev. Jon Spronk officiating. A 1:45 p.m. family prayer service will precede the funeral in the fellowship hall. The burial will be in Forest Cemetery. Visitation will begin at 3 p.m., Monday, at the First Christian Reformed Church; the family will greet visitors from 4-7 p.m. Langkamp Funeral Chapel & Crematory has been entrusted with Ray's final arrangements. Memorial contributions can be made to Mahaska Health Foundation for the Hospice Serenity House.

The family of Raymond Meinders created this Life Tributes page to make it easy to share your memories.

Send flowers to the Meinders family.