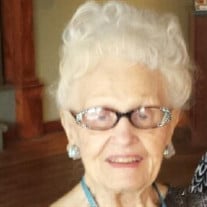 Retha Ray, 93, of Oskaloosa passed away Sunday evening, August 23, 2020, at the Mahaska Health Serenity Hospice House in Oskaloosa. Retha Miriam (Nash) Ray was born March 20, 1927, to Clarence Madison and Florence Mae Rockwell Nash at the rural home of her parents north of Cedar, Iowa. She was educated at the Cedar Consolidated School and attended high school in Oskaloosa. Following high school, Retha worked at the Nieswanger Café and Green & Bently Drug Store as a pharmacy technician. December 22, 1958, Retha married Donald Ray in Richmond, Texas. In 1970, she and Don moved to Aurora, Colorado, where Don worked in the construction of the Cherry Creek Dam. The couple then moved to Hawaii, where they resided for two years before returning to Colorado, where they lived in Craig from 1975 to 1981. While living there, Retha served as a personnel manager for K-Mart. Retha and Don then moved to Marshalltown, where she helped with the opening of a new K-Mart Store. In 1982, they returned to Oskaloosa, where they operated the King Lear Motel for ten years, retiring in 1992. Retha loved to cook; she was an avid reader and, in her younger years, served as a Boy Scout Leader. She is survived by three daughters; Cherie and Don Young of Montezuma, IA, Sharon Ramona Burris of Oklahoma City, OK, and Linda and Ted Smith of Beacon, and two sons: Don and Judy Ray of Carlisle, and Gary and Maxine De Wild of Denver, Colorado; ten grandchildren, 21 great-grandchildren and six great-great-grandchildren; and several nephews and nieces. Retha is preceded in death by her parents and her husband, Don, of over 50 years; a son, Steven; a son-in-law, Vernon Burris; and her siblings and their spouses: Roberta and Floyd Richardson, Clarence, and Jeanne Nash Jr. Ruth and Raymond Towns and Reba and Wayne McWilliams. Funeral Service for Retha will be held at 10:30 a.m., Wednesday, August 26, 2020, at Langkamp Funeral Chapel in Oskaloosa with Reverend Molly Goodrich of the First Christian Church officiating. Burial will be at 2 p.m., Wednesday afternoon in the Iowa Veterans Cemetery near Adel, Iowa. Visitation will begin at 11 a.m., Tuesday at the funeral chapel; the family will greet visitors from 5-7 p.m. According to the rules put in place by the Iowa Department of Public Health, proper social distancing and reasonable personal protective equipment are advised for attending this public event. The service will be available to view on the Langkamp Funeral Chapel’s YouTube channel Wednesday afternoon for those unable to attend the ceremony. Memorial contributions can be made to the American Legion Post #34.

The family of Retha Ray created this Life Tributes page to make it easy to share your memories.

Send flowers to the Ray family.