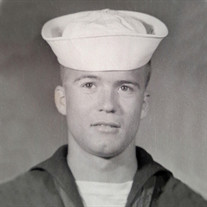 Rex Satterlee, 76, of Reasnor, Iowa and formerly of Beacon, Iowa passed away unexpectedly, Sunday, May 20, 2018, at Iowa Methodist Medical Center in Des Moines, Iowa. Marcy “Rex” Satterlee, son of Orval Eugene and Lena Evaline (Hubbard) Satterlee, was born October 22, 1941, at the rural St. Charles, Iowa home of his parents. Following his education, he enlisted in the U.S. Navy in 1959. While serving his country, he worked as a radioman; this was where he developed a lifelong passion for ham radios. He was discharged in 1963 and returned home to Iowa. November 9, 1963, Rex married the love-of-his-life, Carolyn Ann Phillips at the College Avenue Friends Church in Oskaloosa. To this union, two children were born, Brian and Jill. They first made their home in Patterson, Iowa and later lived in Des Moines, Huxley, Beacon and several other communities. Rex made friends wherever he worked and lived; he was a community-minded person and served as the mayor of Beacon while living there. He served a full term in Reasnor and then was elected by a write-in ballot for the term he was currently serving. Rex considered his work as mayor some of the most important he accomplished; he spearheaded and facilitated the campaign to replace the sanitary sewer system in the community. His current project was a campaign to build a community center in Reasnor. Rex had many hobbies and interests, but ham radio surpassed them all. He “ran net” twice daily for the last 55 years. He had friends and acquaintances in the ham radio world that will very much miss his presence. He also operated a CB radio, where he was known as “The Mold Maker.” He enjoyed hunting, golfing, playing the guitar, and most of all, visiting with friends. Rex is survived by his wife, Carolyn, of 54 years; his children: Brian (Christina) Satterlee of San Tan Valley, AZ and Jill (Adam) Slutsky of Bentonville, AR; five grandchildren: Steven, Jeffery (Bee, fiance’), Chelsey Satterlee and David and Jacob Slutsky; one great-grandchild, Owen; and one brother, Clayton (Mary) Satterlee of Brentwood, CA. Rex was preceded in death by his parents. An open house memorial service is being held on Sunday, May 27th from 1- 3 pm at the Firehouse in Reasnor, IA, where he served as mayor for 6 years. The address to the firehouse is 312 North St., Reasnor, IA 50232. In lieu of flowers, please send donations towards a community center for Reasnor; Donations can be sent to the City of Reasnor, Attn: Community Center Fund, PO Box 68, Reasnor, IA 50232."

The family of Rex Satterlee created this Life Tributes page to make it easy to share your memories.

Rex Satterlee, 76, of Reasnor, Iowa and formerly of Beacon, Iowa...

Send flowers to the Satterlee family.