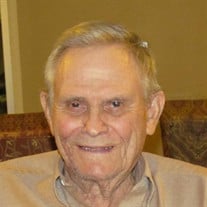 Richard Brummel, 83, of Newton passed away Friday morning, October 5, 2018, at the Newton Health Care Center in Newton, Iowa. Richard Gene Brummel, son of Richard and Bernice (Prine) Brummel, was born March 21, 1935, in Oskaloosa. He was a 1953 graduate of Oskaloosa High School and the following September 26, 1953, he married the love-of-his-life, Lorna L. Parkhurst in Lancaster, Missouri. The initially made their home in Oskaloosa, but subsequently moved to Evansdale, Indiana. They later moved to Marengo, Iowa and Richard went to work at Amana Refrigeration, Inc. in Middle Amana, where he worked until his retirement in 1991. Richard served in the Army National Guard. Richard was an outdoor enthusiast and enjoyed camping with his family, fishing, and coon hunting. The family has many fond memories of backyard games including yard darts, volleyball, and croquet and playing card games around the kitchen table. Richard was also a guitar player and taught his daughter and son to play as well. He enjoyed Blue Grass music the most and jamming with his fellow musicians was a favorite pastime. His family includes his children: Curtis (Tammy) Brummel of Oskaloosa, Jeffery Brummel of Des Moines and Julie Owens of Grinnell, IA; eleven grandchildren and seven great-grandchildren. He was preceded in death by his parents, his wife, Lorna, on January 23, 2013, and two sisters, Janice Brummel and an infant sister. Graveside memorial services will be held for Richard at 3 p.m., Tuesday, October 9, 2018, at Garrett Cemetery near Delta with Pastor Alvern Boetsma of the Good News Chapel officiating. Family and friends can gather at Langkamp Funeral Chapel before 2:30 p.m., to form a procession to the cemetery. Memories and condolences can be sent to the family by visiting langkampfuneralchapel.com.

The family of Richard G. Brummel created this Life Tributes page to make it easy to share your memories.

Send flowers to the Brummel family.