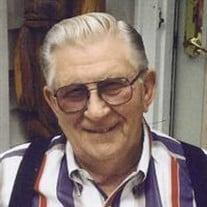 Richard Kelley: Dick passed away Friday afternoon at Mahaska Hospital in Oskaloosa at the age of 79 years, 10 months and 1 day. Dick is survived by two sons: Richard (Mercy) Kelley of Barnes City and Daniel Lee Kelley of Kellogg; a grandson, Daniel Duane Kelley of Newton; two granddaughters: Kathie Lynne Klonglan of Newton and Lou Ann (David) Bruster of Burlington, IA; and two great grandchildren. Richard Amos Kelley, son of William Marion & Hazel Blanche Hungerford Kelley was born July 12, 1925 in Wapello County. Following his education, he served as a carpentry apprentice, a farm hand and as a section hand for the Milwaukee Railroad. On July 9, 1943 he enlisted in the U. S. Navy, and took his boot camp training at Farragut, Idaho; he was discharged as a Seaman First Class on Dec. 12, 1945, after having served in the South Pacific. On August 19, 1950, Dick married Doris Ann Cornell in Mt. Pleasant, Iowa. Richard followed his parent's career path in managing county homes in Oskaloosa, Burlington and Fort Dodge, retiring in 1992. In 1972, his work at the county homes required a high school diploma, so Dick successfully took the G.E.D. exam. He was a member of the V.F.W. and the American Legion, the Sheriff's Posse in Mahaska County and was a Sheriff's Deputy in Des Moines County. Dick was a member of Council Masonic Lodge of Oskaloosa; he had been both a member of York Rite and was a 32nd Degree Scottish Rite Mason; and a member of the Kaaba Shrine of Davenport, Iowa. He had enjoyed belonging to the Snowmobile unit, Fire truck unit, and Clown units of the Shrine. He was preceded in death by his parents; his wife, Doris on Oct. 1, 1999; three sisters: Betty Lou Bond, Shirlee Ora Morrow and Helen Ann Reighard; and four brothers: Robert Keith Kelley, William Lee Kelley, Donald Rex Kelley and James Dale Kelley. PDF Printable Version

The family of Richard Kelley created this Life Tributes page to make it easy to share your memories.

Send flowers to the Kelley family.