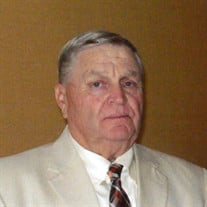 Richard Weidenhaft, 76, of Oskaloosa passed away, Friday, April 12, 2019, at Mahaska Health Hospice Serenity House surrounded by his girls after a brief battle with cancer. Richard Dale Weidenhaft, son of Alfred Dale and Norma Mariece (Stripe) Weidenhaft, was born October 29, 1942, in Osceola, Iowa. He grew up on the family farm near Weldon, Iowa and was a 1961 graduate of Mormon Trail High School. After graduation he purchased a Mobile Station in Osceola; he later closed the station and went to work for Firestone in Des Moines. He married Barbara Bacon August 28, 1964, and they made their home in Osceola. Richard eventually was asked by Firestone to manage stores and then open new stores. This position took the family to Des Moines, Moline, Illinois, Fort Dodge and finally Oskaloosa. He retired from Firestone in 1987 and then began hauling grain and anhydrous ammonia. He retired from trucking in 2010. Richard enjoyed horses from an early age; he became involved in team roping competitions and eventually served as a rodeo judge. He also enjoyed riding his motorcycle, and camping and traveling with his girls. He was an avid St. Louis Cardinal and an Iowa Hawkeye fan, and a member of the Mahaska County Sheriff’s Posse. Richard’s family includes his wife of over 54 years, Barbara; his daughters: Jodie (Kavin) Kingery of Monroe IA, Becky (Kurt) Konek of Monroe IA, and Tracey (Dave) Swan of Lincoln NE; six grandchildren: Colt (Meghan) Kingery, Dalton Kingery, Hayley and Payton Konek, and Kate and Lauren Swan; two great-grandchildren: Ryker and Baylor Kingery. His is also survived by his sisters: Kay (Bob) Putz of Waddell AZ and Patsy Sheehan of Omaha NE; and many nieces and nephews. In addition to his parents, Richard was preceded in death by a brother-in-law, Bob Sheehan and his best friend, Daryl Vandegeest. A memorial service for Richard will be held at 5 p.m., Wednesday, April 17, 2019, at Langkamp Funeral Chapel in Oskaloosa with Kurt Konek officiating. The family will greet visitors from 4-5 p.m. and after the service on Wednesday evening. Memorials can be made to the Mahaska Health Hospice Serenity House.

The family of Richard Dale Weidenhaft created this Life Tributes page to make it easy to share your memories.

Send flowers to the Weidenhaft family.