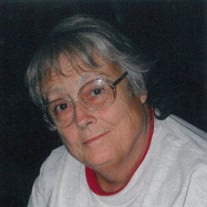 Rilla Rust, 71, of Oskaloosa passed away Thursday, November 15, 2018, at Iowa Lutheran Hospital in Des Moines, Iowa. Rilla Jean Rust was born April 13, 1947, in Oskaloosa, Iowa to Edward Lee and Rilla Ellen (Lesher) Milledge. Because of her father’s job with the M & ST. L Railroad, the family lived in several towns in Central Iowa including Marshalltown and Des Moines while Rilla was in school. She was a 1965 graduate of S.E. Polk High School and then worked a variety of jobs in nursing homes and shopping malls. March 16, 1968, she married her high school sweetheart, George Clayton Rust, at the First Baptist Church in Altoona, Iowa. They lived in the Des Moines area for a year, before moving to Oskaloosa. When she returned to work, she was employed at Tower Park and Pleasant Park Nursing Homes and in 1976; she went to work at Oskaloosa Foods, Inc. For most of her time there, she worked in the white dryer area; she retired in 2008, after 33 ½ years. Rilla and George were charter members of the Rollin Oldies Car Club, lifetime members of the Iowa Street Rod Association and long-time members of the Good-Guys Car Show. She was also a long-time member of the First Assembly of God in Oskaloosa where she taught 3rd and 4th grade Sunday school and assisted with transportation at the church. When they weren’t attending car shows, she also enjoyed walking, reading, watching her grandchildren play sports and just spending time out-of-doors enjoying nature. Her family includes her husband, George of Oskaloosa; her daughters: Rilla Elizabeth Williamson of Oskaloosa and Shelia Jean Rust (Dave Marks Jr.) of Oskaloosa; four grandchildren: George (Abby) Rust of Oskaloosa, Tyler (Maggie) Bartlow of Oskaloosa, MaKayla Lynn Marks of Oskaloosa and Mason C. Marks of Oskaloosa; five great-grandchildren: Edward, Violet, Izaak Jack and Mia. She is also survived by three sisters: Arlene (George) Hassett of Oskaloosa, Darlene Milledge of Pleasant Hill, and Rose Mary (Karl) Moeller of Mitchellville, Iowa. In addition to her parents, she was preceded in death by sons-in-law, Chris Bartlow and James Williamson. Funeral Services for Rilla will be held at 10:30 a.m., Tuesday, November 20, 2018, at the Langkamp Funeral Chapel with Rev. Mike Dotson officiating. Visitation will begin at 11 a.m., Monday at the funeral chapel; the family will greet visitors from 4-6:30 p.m., Monday evening. As was her wish, Rilla’s body will be cremated following the service and her ashes will be buried at Forest Cemetery at a later date. Memorials can be made to Mahaska Health Hospice Services.

The family of Rilla Jean Rust created this Life Tributes page to make it easy to share your memories.

Send flowers to the Rust family.