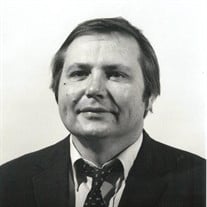 Robert Elder, 77, of Oskaloosa passed away Sunday, November 26, 2017, at his home in Oskaloosa. Robert Lee Elder, son of Wilson Audley Elder and Maxine Vivian Pennock, was born January 27, 1940, in Des Moines, Iowa. When he was 12 years old, the family moved to Tennessee and lived there for a time before returning to Iowa and settling in Shenandoah. Robert graduated from Shenandoah High School with the class of 1958. After graduation, he joined the United States Air Force. He was stationed in the South Pacific and at one point has a chance encounter with a cousin who was working on the airplane on which Robert was flying. After Robert was discharged, he worked as a Course Developer for AT&T and lived in many places around the Midwest including, Emporia, Kansas, Des Moines, Iowa and Olathe, Kansas. In 1974, Robert married Mary Collins in Des Moines. While in Kansas, Mary and Robert were foster parents to 12 children. Robert and Mary were blessed with a daughter, April Anne Elder. Robert never stopped learning and earned his Bachelors in General Studies from Drake University and his B.A. in English from Emporia State University. In 1992 the family moved to Oskaloosa, Iowa. While in Oskaloosa Robert worked for the Oskaloosa Herald. He also worked as a V.A. Coordinator, Emergency Manager for Mahaska County and as Director for the “We Care” food pantry. Robert enjoyed reading, computers and gadgets. He also enjoyed his trips on RAGBRI. His family includes his wife, Mary and his daughter, April both of Oskaloosa, Iowa; one sister, Kaylene Dyke of Shenandoah, IA; one brother, Bill (Diana) Elder of Essex, IA, a good friend, Daniel Campbell, and several nieces and nephews. In addition to his parents, he was preceded in death by a brother, Bud. Funeral services for Robert will be held at 1 p.m., Thursday, November 30, 2017, at the Langkamp Funeral Chapel with Pastor Linzy Collins officiating. Burial will be in West Liberty Cemetery near Searsboro with Military Honors by the Oskaloosa Honor Guard. Visitation will begin at noon, Thursday, one hour prior to the service. In lieu of flowers, memorials may be made to the West Liberty Church of Christ.

The family of Robert Lee Elder created this Life Tributes page to make it easy to share your memories.

Send flowers to the Elder family.