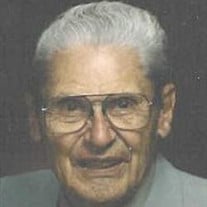 Robert Wayne Hanna: Bob passed away Friday evening, November 7, 2003 at Mahaska Hospital in Oskaloosa at the age of 91 years, 4 months and 13 days. Bob's memory is honored by his children, Jerry & his wife, June Hanna of Roland, IA; Karen & her husband, David Reynolds of New Virginia, IA and Cindy and her husband, Greg Lang of Lee's Summit, MO; and his companion, Donna Ellison of Oskaloosa. He was blessed with 9 grandchildren and 16 great grandchildren. Robert Wayne Hanna, son of Clarence & Eunice Pomeroy Hanna was born May 24, 1912 at home in rural Mahaska county. He attended Allgood Country School and then graduated from Oskaloosa High School in 1929. Following graduation, he began farming with his father on the family farm. On August 26, 1932 he married Maxine A. Cameron, he farmed the family Century Farm until 1958, when he began working for Van Gorp Implement. He later worked for Wake's Feed and then at Quad County Grain, retiring in 1980. In 1992, he and Maxine moved into Oskaloosa. Bob was a member of the First Christian Church in Oskaloosa, where he served in many capacities; he was a past president of the Oskaloosa Community School Board; he served on the board at the Nelson Pioneer Farm and as a leader of 4-H for many years. His favorite pastimes were camping and attending the Iowa State Fair. He was preceded in death by his wife of 68 years, Maxine on December 17, 2000; one sister and 3 brothers, who all died in infancy. PDF Printable Version

The family of Robert Wayne Hanna created this Life Tributes page to make it easy to share your memories.

Send flowers to the Hanna family.