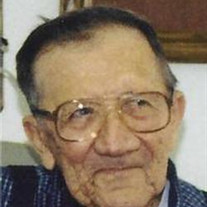 Robert E. Herr: Bob passed away early Sunday morning, November 27, 2005 at the Mahaska Hospital in Oskaloosa at the age of 78 years, 7 months and 17 days. Bob's family includes his wife of 54 years, Margaret Herr of Oskaloosa; two sons, Robert W. (Carol) Herr and Gary (Jean) Herr, both of Fremont, IA; and a daughter: Pam (Doug) Peters of Oskaloosa. He was blessed with seven grandchildren: Jennifer (Roger) Lathen and David (Cara) Herr, all of Fremont; Renee (Steve) Edgar of Oskaloosa; Rusty (Merilee) McGee of New Sharon; Tammy (Mark) Groenendyk of Oskaloosa; Jon Herr of Fremont; Emily Peters of Oskaloosa and 12 great grandchildren. He is survived by a sister, Eleanor (Robert) Parker of Cedar Falls, IA. Robert Herr, son of George D. & Helen K. Riordan Herr, was born April 10, 1927 in the Harper, Iowa area. As a child, Bob's family lived near Harper, where he attended grade school. In 1941, the family moved to Thornburg, where he was a 1945 graduate of Thornburg High School. He enlisted in the Navy following graduation, serving in the Seabees until his discharge on July 25, 1946. Upon returning home Bob began farming. On January 6, 1951, Bob and Margaret D. Husband were united in marriage in Sigourney, IA. They farmed in the What Cheer, Thornburg and New Sharon areas until his retirement in 1994. Bob enjoyed his family, working on tractors and woodworking. He was a 4-H leader for many years and was a member of the White Oak Presbyterian Church. He was preceded in death by his parents. PDF Printable Version

The family of Robert E. Herr created this Life Tributes page to make it easy to share your memories.

Send flowers to the Herr family.