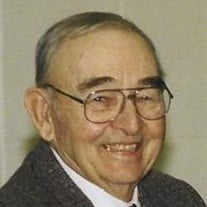 Robert Hugen: Bob long struggle with cancer ended early Tuesday morning, Sept. 14, 2004 at the Ottumwa Regional Health Center at the age of 81 years, 6 months and 1 day. Bob's memory is honored by his wife, Francene of Oskaloosa; a daughter and son-in-law, Mary and William Parsons of Sylvania, OH and their sons: Brian (Nancy) and Scott Parsons; and a son and daughter-in-law: Richard and Kathy Hugen of Oskaloosa and their daughters: Carrie (Jason) Blommers of Leighton; Tina (Jeremy) Vander Molen of Pella; Sheri (Dan) De Nooy of Leighton and Dena Hugen of Oskaloosa ; and their daughter-in-law, Janet Hugen and her children: Katherine (Ryan) Marcum of Iowa City; and Laura and Jonathan Hugen of Oskaloosa; and five great grandchildren. Bob is survived by two brothers: Harold (Nancine) Hugen of Oskaloosa and Dr. Melvin (Sylvia) Hugen of Grand Rapids, MI; two sisters-in-law, Faye and Helen Hugen, both of Oskaloosa; and a brother-in-law, Max Hoeksema of Pella. Robert Owen Hugen, son of Dick & Minnie Grootveld Hugen was born on March 13, 1923 on a farm near Eddyville, IA. Bob attended country school near Eddyville, Leighton, and Pella, before attending Pella High School. Following his education he began farming with his father on the family farm near Leighton. On Sept. 26, 1945 he married Francene De Prenger in the Central Reformed Church Parsonage in Oskaloosa. They started their life together in rural Pella, where Bob continued to work with his father. They farmed in the Fremont, Leighton and west of New Sharon, before settling on their own farm in Union Mills Township. In 1966, they sold that farm and established Oskaloosa International, Inc., and moved into Oskaloosa. Bob retired from the implement business in 1988, but continued to assist his son in the business until 1991, when he sold the business. Even though Bob retired and no longer lived on the farm, he still loved the land, farming, and Mahaska County History; he spent countless hours volunteering his time and energies at the Nelson Pioneer Farm; he was a member of the Mahaska County Historical Society, and the Red Rock Thrashers. He enjoyed his collection of antique tractors and looked forward to riding in several Tractor Rides Across Iowa. Bob was definitely an Iowa Boy, but also loved to travel; he and Francene enjoyed many trips with family and friends to Europe and Hawaii. Bob also loved gatherings of family & friends; his children, grandchildren and great grandchildren were his pride and joy. Bob was a past member and deacon of the Ebenezer Reformed Church in Leighton and a current member of the Central Reformed Church. He was preceded in death by his parents; his son, Ken on March 2, 2002; his brothers, Bert and Henry Hugen and his sister, Mildred Hoeksema. PDF Printable Version

The family of Robert Hugen created this Life Tributes page to make it easy to share your memories.

Send flowers to the Hugen family.