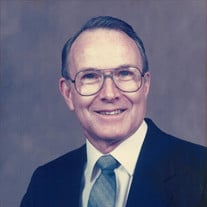 Robert Russell Lynn, 93, of Oskaloosa passed peacefully on December 26, 2018 at the Mahaska Health Hospice Serenity House in Oskaloosa. Bob was born in Oskaloosa on July 11, 1925 to Russell & Frances Lynn. Upon graduation from Oskaloosa High School with the class of 1943, Bob served three years in the Navy where he earned his Naval Aviator wings and left the service as a Lieutenant Junior Grade. Upon returning home, he enrolled at Iowa State College, graduating in 1949. During this time he was united in marriage to Martha Jane Smith of Oskaloosa and raised three children from this union. After his graduation from Iowa State he returned to Oskaloosa and joined the family poultry business. In 1975 the business was sold to ConAgra and Bob developed the business into a poultry sales branch covering seven states, and a refrigerated truck fleet serving 48 states. Bob was a lifelong supporter of the Boy Scouts and shortly after coming back to Oskaloosa became Scoutmaster of Boy Scout Troop 71, the same troop where he was a charter member as a youth. He served in many other capacities with the Boy Scouts, locally and statewide, being recognized with the Silver Beaver Award for his distinguished service. He was known by many in Oskaloosa for the numerous organizations he participated in for his beloved community. Some of Bob’s work included the Oskaloosa Park Board, Water Board, Future View, Past President of Rotary, Daily Trust Fund and served as the mayor of Oskaloosa from 1982-1985. He was recognized as citizen of the year in 1991. After retiring from the poultry business, he was active in community development as part of the Fox Run Development as well as building several small starter homes and renovating the Rock Island Depot. Bob married Sue Danford in 1989 increasing the family by 4 children, and many grandchildren and great-grandchildren. Bob enjoyed traveling, golfing, playing cards with friends, dining out, attending family holidays and was always the official turkey carver. Nobody can carve a turkey like a poultry expert! No matter the event, birthdays, graduations, cheer competitions, baseball games or track meets, Bob & Sue always made time to be there. While visiting family anywhere from Seattle to Indiana, he always came prepared to “fix” something for those of us less inclined or as talented as this generous man. His family and friends remember him as a joyful person – always a quick wit and loved to have fun. His advice to us “always keep your sense of humor”. His family vows to do just that. Bob was preceded in death by his parents, first wife, Martha Jane in 1985, his son Steve and step-daughter Julie. Those left to cherish his memory are his wife Sue, daughter Vicki Lynn of Ames, son Tom (Rocio) Lynn of Goshen IN, daughter-in-law K’Lynn Lynn of Ames. Step-children Teresa (Frank) Starr, Bothell, WA, Cindy (Mark) Kuehn, Snohomish, WA, and Randy (Dawn) Danford, Marion IA. Many grandchildren, great-grandchildren and great-great-grandchildren. Funeral Services for Bob will be held at 10:30 a.m., Saturday, December 29, 2018, at Langkamp Funeral Chapel with Pastor Jerry Douglas of Quincy, Illinois officiating. Military Honors will be presented by the Oskaloosa Honor Guard. Cremation will follow the service and burial of his ashes will be held Saturday at 4 p.m., at Forest Cemetery. The 11th Street entrance of the cemetery should be used when attending the burial. Visitation will begin at 10:30 a.m., Friday; the family will greet visitors at the chapel from 4-6:30 p.m., Friday evening. Memorial contributions can be made to the Mahaska Health Hospice Serenity House.

The family of Robert Russell Lynn created this Life Tributes page to make it easy to share your memories.

Send flowers to the Lynn family.