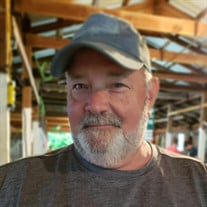 Robin Dee Moore, 64, of Eddyville passed away on July 19, 2020, at the Serenity House in Oskaloosa, Iowa, following a valiant two-year battle against lung and brain cancer. Robin was born May 1, 1956, in Centerville, Iowa, to Wayne and Elizabeth (Richardson) Moore. He graduated from Seymour High School in 1974. Robin never shied away from hard work and especially liked to work outside. Throughout high school, he was in high demand as a hired hand on local farms. After high school, he “got to blow up stuff” while working as a driller using explosives in the quarries for Kaser Corp. in Appanoose County. For a time, he traveled as part of a surfacing crew for the Chicago Milwaukee & Northwestern Railroad. However, farming was his first love. He often said he was able to live out his dream to be a full-time farmer when he owned and operated a 2200-acre cattle, hog, row crop, and hay operation for many years along the Missouri/Iowa State Line near Sewal, Iowa. Robin was united in marriage to Dawn Michelle Dicks of Fremont, California, on September 30, 1995. They were blessed with two children, Vesta Blaire, born in 1996, and Jatin Truxton, who joined the family in 2003 at the age of 17 months. They were truly the joys of his life. In 1996, Robin began as a welder for Vermeer Manufacturing in Pella, Iowa. He worked there for 23 years retiring as Group Leader in 2019 after cancer treatments impaired his mobility. He was honored to be part of the Vermeer “family” and made many lasting friendships there. Robin was passionate about coon hunting, the Iowa Hawkeyes, and goats. He was an avid coon hunter from his teen years and throughout his life. He was often called upon to judge competitive night hunts across the Midwest. He and Abby, one of his many Walker Coonhounds, achieved the coveted title of Nite Champion. One of the greatest demonstrations of his love for his kids was when he allowed daughter Blaire to put an “Iowa State Dad” sticker on his car, in spite of his intense devotion to the Hawkeyes. When Blaire and son Jatin began 4H and FFA, Robin enthusiastically parlayed his knowledge of cattle breeding toward Boer (meat) goats. He, Blaire, and Jatin worked shoulder to shoulder to turn Moore’s Boers into a successful meat goat program that brought home many ribbons and trophies from the County and State Fair, including FFA Reserve Grand Champion Buck at the 2015 Iowa State Fair. Although he coached his kids to be focused competitors in the show ring, the time they spent together as a family and with friends in the goat barn were his greatest reward. Robin took immense pride in his children and all their accomplishments, and he never missed a basketball game, horse show, or archery meet. Robin’s family includes his devoted wife of 25 years, Michelle, and their children Blaire and Jatin, all of Eddyville, son Adam (Meredith) Moore of Des Moines, brother Rick (Barb) Moore of Seymour, Iowa, sister-in-law Stephanie Hall of Newark California, nieces, a nephew, and many cousins. Preceding him in death are his parents and infant sister Terry Lee. The Moore family wishes to thank all the health care professionals who assisted Robin during his last two years. A special thanks to Dr. Jeffrey Martens, cousin Danita Moore Heath, Dr. Bradley Hiatt, Brooke Dannen ARNP, the wonderful staff from Mahaska Hospice, and the Serenity House in Oskaloosa. A Memorial service will be held for Robin at 1:30 p.m., Friday, July 24, 2020, at Langkamp Funeral Chapel with Rev. Kevin Glesener officiating. Burial of his ashes will be held privately at Hillcrest Cemetery near Moravia, Iowa. According to the rules put in place by the Iowa Department of Public Health, proper social distancing and reasonable personal protective equipment are advised for attending this public event. The service will be available to view virtually at Langkamp Funeral Chapel’s YouTube Channel later Friday afternoon. Langkamp Funeral Chapel is handling Robin’s final arrangements. Memorials can be made to the Southern Iowa Fair, 615 North I Street, Oskaloosa IA.

Robin Dee Moore, 64, of Eddyville passed away on July 19, 2020, at the Serenity House in Oskaloosa, Iowa, following a valiant two-year battle against lung and brain cancer. Robin was born May 1, 1956, in Centerville, Iowa, to Wayne and Elizabeth... View Obituary & Service Information

The family of Robin Moore created this Life Tributes page to make it easy to share your memories.

Send flowers to the Moore family.