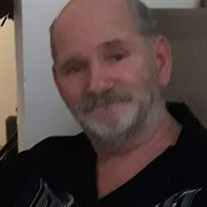 Rocky Lancaster, 61, of Oskaloosa passed away Thursday, February 13, 2020, at his home in Oskaloosa. Rocky Joe Lancaster, son of Alfred David and Betty June (Wiseman) Lancaster, was born June 26, 1958, in Iowa City, Iowa. The family soon moved to Waterloo and then moved to several other communities, including Moulton, Iowa. After his education, Rocky lived in Missouri, Arkansas, and then Muscatine and Ottumwa, Iowa. In 2004, he open his bar, Rocky’s – “Relaxation is Real” and operated it until his retirement in 2010. In 2007, Rocky met April Silvers; they married May 24, 2008. They moved to Oskaloosa in late 2019. Rocky enjoyed fishing, camping and spending time with his family and his friends. His family includes his wife, April of Oskaloosa; his daughters: Angie Randall of Revere, Missouri, Betty Lancaster of Merrill, Iowa and Sandra Lancaster of Burlington, Iowa; step-children: Brittney Van Steenwyk of Ottumwa, Devin Ferguson of Watertown, NY, Tisha Ferguson of Florida and Austin Ferguson of Florida; his siblings: Donald Purington of Arizona, Chester Lancaster of Albia, Iowa, Fay Smith of Danville, Iowa, David Lancaster of Galena, Illinois, Eunice Wright of Muscatine, Iowa, Dorothy Martin of Lake Rathbun, Iowa, Elliott Lancaster of Lake Rathbun, Iowa, and Becky Pace of Revere, Missouri; two brothers-in-law: Joey Silvers and Corey Silvers, both of Oskaloosa; and many nieces and nephews. As was his wish, Rocky’s body has been cremated. A Memorial Gathering will be held from 1-3 p.m., Friday, February 21, 2020, at the Gateway Church of the Nazarene. Langkamp Funeral Chapel & Crematory is handling the arrangements. Memorial contributions can be made to the Family.

The family of Rocky Joe Lancaster created this Life Tributes page to make it easy to share your memories.

Send flowers to the Lancaster family.