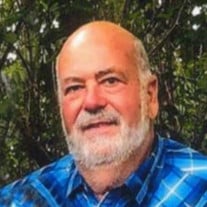 Ron Van Alst, 67, of Oskaloosa passed away Thursday, September 17, 2020, at his home in rural Oskaloosa. Ronnie Lee Van Alst, son of Gabel Alonzo and Letola Viola (Ritchie) Van Alst, was born on August 30, 1953, in Ottumwa, Iowa. The family resided in Eddyville, where Ron attended school through the 5th grade before moving to Oskaloosa. He was a 1971 graduate of Oskaloosa High School and then went to work for Oskaloosa Glass and Millwork, a career that spanned almost 25 years. In 2006, Ron started his own glass company, Givin Glass. He operated it until declining health required his retirement. On October 24, 1975, Ronnie married Laurie Lynne Crosby in New Sharon. To this union, three children: Shannon, Shane, and Shauna, were born. They divorced in 1995. Through the years, he enjoyed deer hunting, dirt track racing, NASCAR, cooking, and playing cards. He also enjoyed finding and collecting all types of brass objects. He was a past member of the Shriners, V.F.W., and the American Legion. After Ron’s retirement, he enjoyed living “off the grid” at his cabin on an acreage with a pond on Kent Avenue. He truly treasured the time he spent with his family and his six granddaughters. Ron’s family includes his children: Shannon Van Alst of Oskaloosa, Shane Van Alst of Oskaloosa, and Shauna (Chris) Schwab of Verona, Wisconsin; six granddaughters: Kierstin, Aleigha, Danielle, Shayna, and Braelyn Van Alst and Kenadi Schwab; a sister, Alice Jane Klyn of Ottumwa; and a brother, George (Sandra) Van Alst of Des Moines. In addition to his parents, Ron was preceded in death by a brother, Charles Van Alst, and a sister, Mary Anne Funk. Funeral services for Ron will be held at 10:30 a.m., Monday, September 21, 2020, at Langkamp Funeral Chapel & Crematory in Oskaloosa with Pastor Charlie McMillian officiating. Cremation will follow the service, and burial of his ashes will take place at a later date at Highland Cemetery in Eddyville, Iowa. Visitation will begin at 11 a.m., Sunday, at Langkamp Funeral Chapel; the family will be present from 2-4 p.m. to greet visitors. Memorials can be made to his family. According to the rules put in place by the Iowa Department of Public Health, proper social distancing and appropriate personal protective equipment are advised for attending this public event. The service will be available to view on the Langkamp Funeral Chapel’s YouTube channel Monday afternoon for those unable to attend the ceremony.

The family of Ron Van Alst created this Life Tributes page to make it easy to share your memories.