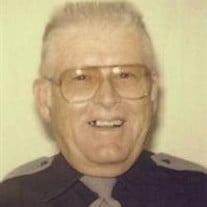 Ronald LaVern Comstock: Ron passed away early Sunday morning at Mercy Hospital in Des Moines, Iowa at the age of 66 years, 7 months and 27 days. Ron is survived by his wife, JoAnn Comstock of Oskaloosa; his mother, Beryl Comstock of Phoenix, AZ; a sister, Joanne (Don) Wullenwaber of Sun City West, AZ; an uncle, Guy Jones of Boone, IA; an aunt, Mary Miller of Arkansas; sisters-in-law, Jean (Larry) Schwieger of Clear Lake, IA and Karen (Steve) McCoy of Jefferson, IA; a brother-in-law, Chuck (Brenda) Swaim of Ames, IA and several nieces and nephews. Ronald LaVern Comstock, son of E.V. and Beryl Jones Comstock was born January 22, 1939 on a farm near Madrid, Iowa. After graduating from Boone High School in 1957, Ron served with the U.S. Navy and the Army National Guard. On May 26, 1962 he married JoAnn Swaim in Jefferson, IA. They moved to Boone in 1963, where Ron worked as a Boone police officer. On May 26, 1965, he was sworn in to the Iowa Highway Patrol and he and Jo then relocated to Oskaloosa, IA. Ron worked for the Highway Patrol for 29 years retiring in 1994. Ron lived his life with intensity and passion. Whether it was patrolling Iowa highways, swinging a golf club, hiking through Iowa's woodland while hunting, flying his plane, throwing a bowling ball, riding his Harley or casting his line for bass; he loved it all and strove for excellence in everything he did. He was a member of the First Presbyterian Church, where he was a deacon and an usher; the Elks; Retired Peace Officers and the South Central Iowa Bass Club. He was preceded in death by his father, E.V. Comstock; and brothers, Richard and Raymond Comstock. PDF Printable Version

The family of Ronald LaVern Comstock created this Life Tributes page to make it easy to share your memories.

Send flowers to the Comstock family.