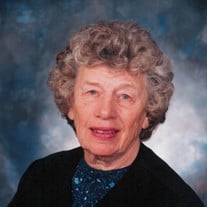 Rosetta Fry, 92, of Oskaloosa, passed away Tuesday, April 14, 2020, at the Northern Mahaska Specialty Care Center in Oskaloosa. Rosetta Alice Fry, daughter of Joseph E. and Myrtle M. (Long) Vodicka, was born August 14, 1927, at the rural home of her parents in Washington County, Iowa. Rosetta’s early education was at a country school in Washington County, and she was a graduate of Kalona High School. She went on to earn her B.A. in Music from Parson’s College in Fairfield and later earned a Master’s Degree in Music Education from Drake University in Des Moines. Rosetta was a K-12th grade public school music teacher and taught other courses as well. Rosetta married Kenneth Fry, May 20, 1951, in Washington, Iowa. Ken’s job as an educator, eventually took them Iowa City in 1962. Rosetta stayed home to raise her family when her children were young, and when they were older, she taught private music lessons in her home. After Ken’s retirement, they moved to Oskaloosa in 1992. Rosetta was a member of the Central United Methodist Church, Eastern Star, V.F.W. Auxiliary and D.A.R. She, Kenneth, and their children were active in church work in the communities they resided. Rosetta enjoyed cooking and baking for her family; she also loved tending her flower gardens and mowing the lawn. In her later years, she enjoyed attending the Grant School Senior Citizen’s Center and doing puzzles. Her family includes her children and their spouses: Daniel L. and Sylvia Fry of Dalton City, Illinois, Patricia and James Nuss of Dublin, Georgia, Kathryn and Glenn Stine of Carbondale, Illinois, and Terrance A. Fry of South English, Iowa; six grandchildren: Keith Fry and Belinda Linton, Craig Fry and Courtney Long, Anna Nuss and her husband John Waddell, Raymond Nuss, Lisa Stine and her brother David Stine; and five great-grandchildren. In addition to her parents, Rosetta was preceded in death by her husband, Kenneth, on March 13, 2007; two sisters: Marguerite Lybbert and Violet Chalupa; and a step-grandson, Brian Cook. Private funeral services will be held on Monday, April 20, 2020, with Rev. Bruce Wittern of the Central United Methodist Church officiating. Burial will be in Forest Cemetery. A Memorial Service will be held at a later date. Langkamp Funeral Chapel has been entrusted with her arrangements. Instead of flowers, memorial contributions may be made to St. Jude’s Children’s Hospital, Central United Methodist Church, or the Senior Citizen’s Center of Oskaloosa.

The family of Rosetta Fry created this Life Tributes page to make it easy to share your memories.