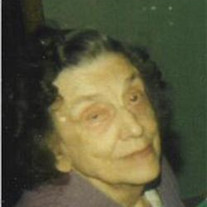 Ruth Janet Robbins: Ruth passed away Tuesday morning at Mahaska Hospital in Oskaloosa at the age of 86 years, 11 months and 2 days. Ruth's memory is honored by her husband, Richard C. Robbins of Oskaloosa; and two daughters and a son-in-law: Janet Robbins of Oskaloosa and Martha & Daniel Arizumi of Littleton, CO; a brother and sister-in-law, Gilbert & Marie Staman of Amana, IA; a nephew and his wife, Paul & Margaret Staman of High Amana, IA; a great niece, Rachel Staman and several cousins. Ruth Janet Robbins, daughter of Ray Morton & Helen Josephine Drake Staman was born June 16, 1917 in Walnut, Iowa. She was a 1936 graduate of Walnut High School and soon began teaching rural school near Marne, IA. After teaching for one year, she attended Iowa State University for one year, where she studied textile and design. She then transferred to Drake University, studying elementary education, majoring in English. She received her Associate Degree from Drake in 1939 and then began teaching in Kingsley, IA, where she taught 2 years. She married Richard C. Robbins on Sept. 19, 1943 in Atlantic, IA. They moved to Colorado, where they lived in Manzola and Rocky Ford, Ruth taught in both of these communities. After spending eleven years in Colorado, they moved to Oskaloosa in 1955. Ruth continued her education at Drake University, earning her Bachelor's Degree in Education in 1967 and beginning work towards her Master's Degree. Ruth taught 5th & 6th grades in Twin Cedars for 9 years, and 2 years in the Oskaloosa School system, one year in Rose Hill and one year at Lincoln and Jefferson. She retired from teaching in 1971. Ruth was a dedicated housewife and mother; she was a member of the First Presbyterian Church, and a past member of A.A.U.W., the American Legion Auxiliary, the P.T.A., Girl Scout Leader and the Drake University Alumni Association. She enjoyed baking, gardening and canning, sewing and quilting, she also enjoyed classical and religious music and was a good neighbor. She was preceded in death by her parents and several aunts and uncles. PDF Printable Version

Ruth Janet Robbins: Ruth passed away Tuesday morning at Mahaska Hospital in Oskaloosa at the age of 86 years, 11 months and 2 days. Ruth's memory is honored by her husband, Richard C. Robbins of Oskaloosa; and two daughters and a son-in-law:... View Obituary & Service Information

The family of Ruth Janet Robbins created this Life Tributes page to make it easy to share your memories.

Send flowers to the Robbins family.