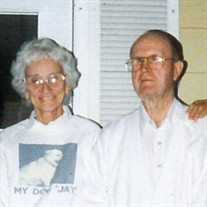 Ruth Smith, 101, of Oskaloosa, died Saturday morning, April 17, 2021, at the Mahaska Health Hospice Serenity House in Oskaloosa. Ruth Smiley Smith, daughter of Bruno and MaryAnn (Robinson Kane) Pierce, was born February 20, 1920, in Knoxville, Iowa. The family moved to Oskaloosa, and following her graduation from Oskaloosa High School in 1937, she attended the Iowa State Teachers College, now the University of Northern Iowa in Cedar Falls. After two years at college, she returned to Oskaloosa and went to work at the Bell Telephone Company. Ruth married Burrell W. Smith on September 18, 1948, in Oskaloosa. They made their home in Oskaloosa, and Ruth later worked as Burrell’s secretary at the juvenal probation office. Ruth was a member of the St. James Episcopal Church and served as the church organist and treasurer for several years. She was also a member of the King’s Daughters. She enjoyed her flower garden in her spare time, and her pets were brought her much joy. Her family includes her son, Gary Smith of Oskaloosa; a daughter, Colleen Bartlett of New Sharon; and a grandson, Daniel Richards of Oskaloosa. IN addition to her parents and her husband, Burrell, on February 1, 1996, Ruth was preceded in death by a sister, Joan McMains, and a brother, Walter Pierce. As was her wish, Ruth’s body has been cremated. Langkamp Funeral Chapel & Crematory has been entrusted with her final arrangements.

The family of Ruth Smiley Smith created this Life Tributes page to make it easy to share your memories.

Send flowers to the Smith family.