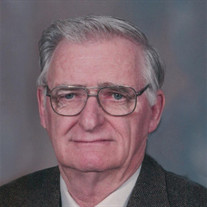 Sam Kool, 87, of Eddyville passed away Saturday, June 8, 2019, at the Mahaska Health Hospice Serenity House in Oskaloosa. Samuel Rudolph Kool, son of Fred and Frieda (Hewitt) Kool, was born March 15, 1932, in Mahaska County, Iowa. He attended Mahaska County rural schools and was a 1951 graduate of Oskaloosa High School. Sam married Alice Van Zante on April 3, 1953. Sam’s love of farming started at a young age; as a boy, he worked for neighboring farmers as a hired man and continued to do so throughout his high school years. After high school graduation, he was hired by Iowa Power Company. He worked firing the boilers and later as a truck driver for the line crew. During this time, Sam served in the National Guard for nine years. He worked for the power company for 12 years, and during that time, Sam was able to realize his dream of owning and operating a farm. He and Alice purchased 40 acres in Mahaska County and then 100 acres on the Glendale Road. In 1969, they acquired their farm in Monroe County near Albia. In addition to farming, Sam operated Sam Kool By-Product Feed until his retirement in 2000. After his retirement, Sam continued to enjoy following the business investment world. As a father, Sam very much enjoyed raising his sons and the activities they did together, and he was very proud of their accomplishments as young men and throughout their lives. In his free time, Sam enjoyed reading and riding his bicycle. He was a member of the Eddyville United Methodist Church. Sam is survived by his wife, Alice of Eddyville; three sons and daughters-in-law: Ronald Kool of Tucson AZ, Roger and Betty Kool of Albia, and Steven and Cathy of Moravia; three grandchildren: Adam (Casey) Kool of Moravia, Lori Kool of Des Moines, and Brian (Kristin) Kool of Eddyville; four great-grandchildren: Lane, Sidney, Bentley and Mackenzie; and a brother and sister-in-law, Howard and Janet Kool of McCook NE. In addition to his parents, Sam was preceded in death by a granddaughter, Denise at birth; three sisters: Stella Cook, Zua Kool, and Kathy Rawson; and four brothers: Tony, Clayton, Harry, and Andrew in childhood. Funeral Services for Sam will be held at 10:30 a.m., Wednesday, June 12, at Langkamp Funeral Chapel with Rev. Olivia Fabros of the Eddyville United Methodist Church officiating. Burial will be at Forest Cemetery. Visitation will begin at 10 a.m. on Tuesday; the family will greet visitors from 5-7 p.m. Tuesday. In lieu of flowers, memorial contributions can be made to the Mahaska Health Foundation for the Serenity House or the Iowa Alzheimer’s Association.

The family of Sam Kool created this Life Tributes page to make it easy to share your memories.