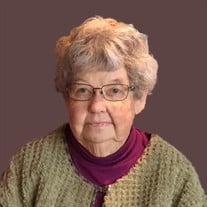 Sandra Stewart, 85, of Oskaloosa, passed away Friday, April 1, 2022, at Mercy One Medical Center in Des Moines. Sandra Lee Stewart, daughter of Howard “Lee” and Carmen Ione (Wood) Phillippe, was born November 5, 1936, in Fremont, Iowa. The family moved to Oskaloosa when Sandra was six years old, and when she was in high school, she worked at Kresge’s Department Store. Sandy was a 1955 graduate of Oskaloosa High School. On October 4, 1957, she married the love of her life, LaVerne “Vern” Dewayne Stewart, at the First Christian Church in Oskaloosa. When her children were small, she stayed home to care for them. In the late 1960s, Supersweet hired Sandy as a sales secretary. She worked for Supersweet for 23 years, retiring in 1992 to care for her ailing mother. Sandy volunteered at Mahaska Hospital in the surgery center, and after the Hospice Serenity House opened, she began volunteering there; she enjoyed serving and caring for families until recent months. Sandy’s faith and church family were very important to her. She was baptized at the First Christian Church in Oskaloosa at age 12 on October 17, 1948. She attended and served in many ways through the years and was a member of the Lydia Circle. Sandy was a lifetime member of the O.E.S. and Beta Sigma Phi. She loved attending garage sales, auctions, and flea markets; she also had a booth at the What Cheer Flea Market for several years. Her family includes her sons and daughters-in-law, Mark and Kristin Stewart of Cedar Falls and Scott and Diane Stewart of Oskaloosa; four grandchildren: Jenna Stewart of Coralville, Jamie Stewart of Rochester, MN, Kara Stewart of Burnsville, MN, and Connor Stewart of Cedar Falls. In addition to her parents, Sandy was preceded in death by her husband Vern on April 21, 2008, and an infant sister, Valeta Lee. Funeral Services for Sandy will be held at 10:30 a.m., Tuesday, April 5, 2022, at the First Christian Church in Oskaloosa, with Reverend Molly Goodrich officiating. The burial will be in Forest Cemetery. Visitation will begin at 11 a.m. Monday at Langkamp Funeral Chapel, the family will greet visitors from 5-7 p.m. Memorial contributions can be made to the First Christian Church or Mahaska Health Foundation for the Hospice Serenity House.

The family of Sandra Stewart created this Life Tributes page to make it easy to share your memories.

Send flowers to the Stewart family.