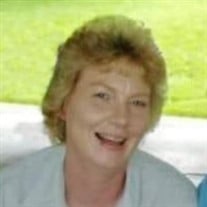 Sandy Whitfield, 54, of Oskaloosa passed away Monday, October 26, 2020, at her home in Keomah Village, Oskaloosa, Iowa. Sandra Kay Whitfield, daughter of Merrill Dean and Lois Mae (Failyer) Stock, was born July 30, 1966, in Newton, Iowa. Sandra spent her early years on the family farm near What Cheer, but after her father died, the family moved to Oskaloosa. She was a 1984 graduate of Oskaloosa High School. Sandy was employed at Pella Corp for 21 years; she worked in the metal plant for several years, but most recently worked in the door plant, operating the CNC machines. Sandy was blessed with three children, Andrew, Stacey, and Kristine; she loved her role as mother and grandmother. She was a very considerate person, always doing things for others. She enjoyed living at Lake Keomah, spending time with her family, and her cat, Riley, and dog, Carson. In her free time, she enjoyed playing BINGO. Sandra is survived by her spouse, Paul Beltz; her children: Andy (Nikki Sparks) Stock of Oskaloosa, Stacey Whitfield of Oskaloosa, and Kristine Whitfield of New Sharon; five grandchildren: Jett, Griffin, Jaxson, and Rylan Stock, and Hadley Whitfield; two stepchildren, Zach Beltz and Libby Beltz, both of Oskaloosa; her siblings: Paul Foley of Dallas, TX, Randy Stock of Oskaloosa, Pat (Lynn) Hudnut of Montezuma, and Kathy (Bryan) Butler of Oskaloosa; many nieces, nephews, cousins and friends; and very good friends, Diane (Rick) Iseton of Oskaloosa. In addition to her parents, Sandy was preceded in death by a sister, Deb Sperry. As was her wish, Sandy’s body has been cremated. A memorial service will be held at a later date. And burial of her ashes will be in Sixteen Cemetery north of What Cheer, Iowa. Memorial contributions can be made to the family and will be designated later. Arrangements have been entrusted to Langkamp Funeral Chapel & Crematory.

The family of Sandy Whitfield created this Life Tributes page to make it easy to share your memories.

Send flowers to the Whitfield family.