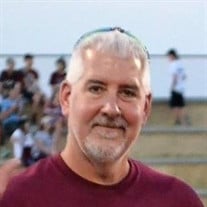 Scott Van Roekel, 52, of Oskaloosa, passed away Sunday morning, March 28, 2021, in Waverly, Iowa. Scott Junior Van Roekel was born October 13, 1968, in Oskaloosa, IA, to Otto “Junior” and Cecelia (Reese) Van Roekel. Scott enjoyed playing football, basketball, and baseball throughout his life and was always an avid sports fan. He graduated with the class of 1987 from Oskaloosa Senior High School. After graduating from St. Ambrose, Scott returned to Oskaloosa and began working for Dickinson Company, Inc. After nearly 20 years, he left Dickinson Company to work for MUSCO, and later transitioned to MCG. Upon leaving MCG, he worked for GSTC and had made a recent job change to Ideal Ready Mix. Scott was united in marriage to Wendy Tallman on April 2, 1994, at the Central Reformed Church in Oskaloosa. Scott enjoyed spending his time coaching his children’s athletic teams and cheering on his beloved teams: the Iowa Hawkeyes and the Pittsburg Steelers. Watching NASCAR races was also one of his favorite ways to relax. Scott’s family pets and the surrounding wildlife brought much joy to Scott and the entire family. He was a member of the Oskaloosa Booster Club and the Wartburg Booster Club. Scott and his family attended Central Reformed Church. His family includes his wife of 26 years, Wendy; his children: Jacey Van Roekel of Princeton, NJ, and Jaden Van Roekel of Waverly, IA; his mother, Cecelia Van Roekel of Oskaloosa, IA; a sister, Shari Day of Oskaloosa, IA; his father-in-law and mother-in-law, William and Janet Tallman of Blair, NE; brother-in-law Joshua Tallman of Marion, IA; nephew, Justin (Danielle) Day of Albia, IA; and a special uncle, Wayne Van Roekel of Oskaloosa and several other uncles, aunts, and cousins. Scott was preceded in death by his father, Junior Van Roekel. Funeral Services for Scott will be held at 11 a.m., Saturday, April 3, 2021, at Central Reformed Church, with Rev. Jon Nelson officiating. Cremation will follow the service. Visitation will be held from 11 a.m. to 7 p.m., Friday at Langkamp Funeral Chapel. According to the rules put in place by the Iowa Department of Public Health, proper social distancing and appropriate personal protective equipment are advised for attending this public event. The service will be available to view at https://livestream.com/centralreformed or viewed later at Langkamp Funeral Chapel’s YouTube channel. Memorial contributions can be made to Stephen Memorial Animal Shelter or the Oskaloosa Booster Club.

The family of Scott Van Roekel created this Life Tributes page to make it easy to share your memories.