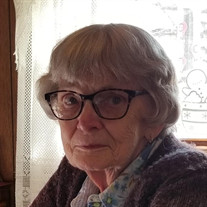 Shirley Allison, 85, of Oskaloosa passed away early Wednesday morning, February 6, 2019, at her home in Oskaloosa. Shirley Jean Allison, daughter of Harold Andrew and Verna Marie (Johannes) Ferns, was born December 13, 1933, near What Cheer, Iowa. She attended Tri-County Schools and was a member of the What Cheer United Methodist Church. She worked with her parents on the farm until she married Kenneth Earl Allison, June 29, 1951, at Eddyville. Shirley and Kenneth lived in What Cheer, Ottumwa, Cedar, and Beacon before settling in Oskaloosa. Shirley was a homemaker, and her family was always her priority. She enjoyed nature and especially liked watching and feeding the birds outside her windows. In her later years, she enjoyed an occasional trip to the Prairie Meadows and Mesquaki Casinos. Her family includes her sons: Steven Allison of Eddyville, Kennie Allison of Oskaloosa, and a grandson whom they raised, Steven (Stephanie) Allison Jr. of Eddyville; six additional grandchildren; 14 great-grandchildren; two great-great-grandchildren; a brother, Loren Ferns of Chicago, IL; and two sisters: Joann Asher of Beacon and Gladys Barainca of Sumner, Iowa. In addition to her parents, Shirley was preceded in death by her husband, Kenneth on Nov. 13, 2017; a daughter and son-in-law, Debra Renee and Darwin Alsburg; and two brothers: Gary and Ronnie Ferns. A Memorial Service for Shirley will be held at 2 p.m., Monday, February 11, at Langkamp Funeral Chapel with Pastor Alvern Boetsma of the Good News Chapel officiating. Burial of her ashes will be in Forest Cemetery. The family will greet visitors from 1 p.m. to service time on Monday. Memorials can be made to the Oskaloosa V.F.W. Post.

The family of Shirley Jean Allison created this Life Tributes page to make it easy to share your memories.

Send flowers to the Allison family.