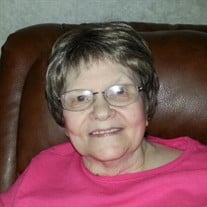 Shirley Flaherty, 81 of Oskaloosa, Iowa, went to meet her Savior on Saturday, April 11, 2020, at Crystal Heights Care Center. Shirley Mae Flaherty, the youngest of nine children born to Pearl and Mary (Miller) Hart, was born August 13, 1938, in Eldon, Iowa. Her father was a railroad engineer, and her mother was a housewife. She attended school in Eldon, Iowa. She was musically inclined from an early age, and she played the piano, guitar, and saxophone. Her love of music led her and her best friend, Doris Jean, to create the duet, Iowa Sweethearts. They participated in talent shows at radio stations all over southern Iowa in the early 1950s. It was one such competition at the Eldon radio station that she met her husband, Pat Flaherty. Shirley and Pat were married on June 2, 1956, in Eldon, Iowa, in her parents' back yard. Shortly after, they moved to Oskaloosa, Iowa, where she did the bookwork for the veterinarian, Dr. Nuckolls, and worked at Holton's Fashions. From 1969 -1977, she also helped operate Licorice Pudding, a music store she and Pat owned and operated with a miniature golf course in the basement. She enjoyed being a homemaker. She loved to cook for her family and friends and was known for many famous dishes and desserts. Shirley's home, as was her heart, was open to all; her children's friends always felt welcome at the Flaherty's. She never lost her love of music; she taught piano and guitar lessons to many students and passed it on to her children and grandchildren. She also loved teaching her grandchildren how to sew and cook. Shirley was a member of St. Mary's Catholic Church. She truly was a woman of faith, and she spoke and sang of her Savior often. Her family includes her husband, Pat; their three sons: Kevin (Vickie) Flaherty, Overland Park, Kansas, Kurtis (Kelli) Flaherty, Winston, Georgia, and Michael (Kari) Flaherty, Mount Horeb, Wisconsin; nineteen grandchildren; nineteen great-grandchildren; a sister, Marilyn (Bob) Wells of Des Moines; a brother-in-law, Ed Wright of Ottumwa; and many nieces and nephews. She was preceded in death by her parents; her siblings: Izetta Keasling, Margie Carter, Betty Wright, Richard Hart, Paul Hart, Doris Brooks, and Marie Hurley; and a great-granddaughter, Annie Schultz. Due to the restrictions put in place by the Iowa Department of Public Health, a private graveside service will be held for Shirley on Wednesday, April 15, 2020, at Forest Cemetery. A Memorial Mass for Shirley will be held at a later date and will be announced. Arrangements entrusted to Langkamp Funeral Chapel & Crematory. The recorded service will also be made available through Langkamp Funeral Chapel's YouTube channel for future viewing. Instead of flowers, please consider a donation to St. Mary's Catholic Church in her memory.

The family of Shirley Mae Flaherty created this Life Tributes page to make it easy to share your memories.

Shirley Flaherty, 81 of Oskaloosa, Iowa, went to meet her Savior...

Send flowers to the Flaherty family.