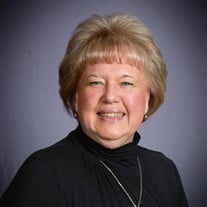 Shirley Ann Meppelink, 72, of Oskaloosa, Iowa, passed away Wednesday, July 8, 2020, at Comfort House in Pella, Iowa. Private family services will be held through the Langkamp Funeral Chapel in Oskaloosa with a private family burial to be held at Evergreen Cemetery in Leighton, Iowa. Graveside prayers and services are to be performed by Pastor Phil DeBoef of the Third Reformed Church in Pella, Iowa, of which she was a member. Shirley was born February 2, 1948, to Raymond Earl and Selma Leora (Jensen) DeVore in the Decatur County Hospital, Leon, Iowa. Shirley graduated from Oskaloosa High School in 1966, having simultaneously earned her two year Office Education degree. She attended Vennard College and held executive secretary positions at Look magazine and the Clow Corporation until her marriage to Alven Meppelink. Shirley and Alven met in June 1968 and committed to marry by the time he left for deployment to Vietnam in August 1968. They were engaged on September 9, 1969, and married at the Wesleyan Church with their reception held in the girls’ dorm lounge at Vennard College on December 20, 1969. Shirley and Alven had one son, David. Shirley was a homemaker until Dave was school age. After that time, she worked as the Director of Publications at Vennard College, where she wrote the alumni quarterly newsletter and press releases. After leaving this position, Shirley took many adult education classes at Indian Hills Community College and Central College in a variety of subjects - desktop publishing, writing, voice, and music. Shirley led a great life, driven by her faith in God and love for her family. She had a few things of which she was very proud: traveling and visiting 27 of the 60 National Parks (Rocky Mountain, Glacier, and Yellowstone were the favorites, and they visited them more than once); being called upon on September 11, 2001, to be an intercessor after the terrorist attacks; and creative writing. Most important to her, Shirley was proud of her grandsons. She and Alven were fantastic grandparents and were very involved in all aspects of their grandsons’ lives. Shirley was preceded in death by her parents and in-laws. Shirley is survived by her husband of 50 years, Alven of Oskaloosa; son, David (Shannon) of West Branch; five grandsons: Aaron and fiancé, Nicole Barrett, Nicholas, Matthew, Rafe, and Jacob; brothers: Larry (Judy) DeVore, Darrell (Sandy) DeVore, sister Nancy DeVore, all of Oskaloosa; sister-in-law Ilene Meppelink of Pella; many cousins, nieces and nephews; and special ‘son’ Eric Barrett. In lieu of flowers, memorials may be made to the Third Reformed Church in Pella https://trcpella.com/giving/giving-at-third-church/ , the National Parks Foundation https://give.nationalparks.org/site/Donation2?df_id=1520&1520.donation=form1&mfc_pref=T, or Pella Hospice https://www.pellahealth.org/services/hospice/ .

Shirley Ann Meppelink, 72, of Oskaloosa, Iowa, passed away Wednesday, July 8, 2020, at Comfort House in Pella, Iowa. Private family services will be held through the Langkamp Funeral Chapel in Oskaloosa with a private family burial to be held... View Obituary & Service Information

The family of Shirley Meppelink created this Life Tributes page to make it easy to share your memories.