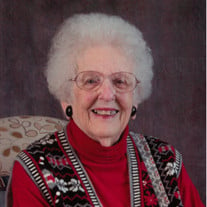 Shirley Morrison, age 96 of Oskaloosa, passed away Thursday, December 12, 2019, at the Homestead Assisted Living in Oskaloosa. Shirley Ruth Morrison, daughter of Thomas Elmer and Tott Flossie Morgan Grant, was born November 10, 1923 in Brighton, Iowa. She attended school in Brighton and was a 1941 graduate of Brighton High School. After her education, Shirley moved to Oskaloosa, where she lived with her older sister, Isabel and worked as a clerk at Kresge’s Dime Store. On August 30, 1945, Shirley was united in marriage with Burl Harvey Morrison at the Little Brown Church in Nashua, IA. They made their home in Oskaloosa and Shirley worked as an operator at Bell Telephone Office. In 1946, she became a full-time homemaker and mother. Shirley enjoyed participating in and watching sports, especially her beloved Iowa Hawkeyes. She excelled at golf and in 1962 took home the championship trophy in the Oskaloosa City Women’s Tournament. She also enjoyed her home and baking for family and friends. In retirement, she and Burl were able to travel together and eventually spent their winters in Arizona. Shirley was an active member of St. Paul Congregational United Church of Christ. Shirley’s family includes a son and daughter-in-law, Donald and Roxanne Morrison of Oskaloosa; a son-in-law, Larry Klein of Tuba City, AZ; grandchildren: Stacie Klein, David (Farrah) Klein, Ryan (Cheryce) Morrison, Jamie Morrison and Thomas (Jessica) Morrison; 19 great grandchildren and 2 great-great grandchildren Besides her parents, she was preceded in death by her husband, Burl, a daughter, Sandra Klein; brothers: Harry and Kenneth Grant and sisters: Gladys and Isabel Schooley. Funeral Services for Shirley will be held at 10:30 am, Wednesday, December 18, 2019, at Langkamp Funeral Chapel with Pastor Carol Iammatteo-Code officiating. Burial will be in Forest Cemetery. Visitation will be held Tuesday, beginning at 11 a.m. with the family present to greet visitors from 4-6 p.m. Memorials can be made to the Oskaloosa High School Band Boosters or the Oskaloosa City Band.

The family of Shirley Ruth Morrison created this Life Tributes page to make it easy to share your memories.

Send flowers to the Morrison family.