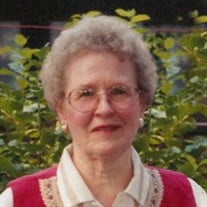 Shirley J. Wells, 91, of Oskaloosa passed away Tuesday, January 28, 2020, at the Mahaska Health Hospice Serenity House in Oskaloosa. Shirley was born on January 1, 1929, the fifth of six children born to William T. and Hazel Mae (Teal) Jones in Oskaloosa, Iowa. As a youngster, she enjoyed swimming and playing softball, and she worked detasseling corn in the summer with her friends. While attending Oskaloosa High School, she was active in Hi-Tri, Girl Reserves, Student Government, Sub Debs, Craft Club, and Girl’s Glee Club; she was also a Homecoming Attendant and a Relay Queen Nominee. She graduate in 1947 and then worked briefly as a Northwestern Bell Telephone operator. She married a young Air Force veteran, Vernon Gene Wells, August 17, 1947, in Oskaloosa. In the early years of their marriage, Vernie’s job required much time away, so Shirley was the sole parent much of the time. She devoted herself to raising her daughters, and they remember her as a mom that liked to get the housework done first and then allowed time for fun. Shirley enjoyed nature, and the family enjoyed many picnic lunches while bird watching in the country. She enjoyed playing bridge and was an avid reader. In her later years, Shirley and Vernie wintered for over 30 years in Arizona and enjoyed many trips world-wide. She was a member of St. James Episcopal Church. Her family includes her husband of over 72 years, Vernon of Oskaloosa; her daughters: Kristine Wells (John Waters) of Des Moines, Mary (Stephen) Moore of St. Louise MO, and Dede Horn of Oskaloosa; six grandchildren and 11 great-grandchildren. In addition to her parents, Shirley was preceded in death by her three sisters: Eileen Suiter, Johnita Jones, and Evelyn Zach; and two brothers: Bill and Bobbie Jones. As was her wish, Shirley’s body has been cremated. Private memorial services will be held at a later date. Memorial contributions can be made to Old White Cemetery, Inc. and will be used for music scholarships for Mahaska County students. Langkamp Funeral Chapel & Crematory is handling her arrangements.

The family of Shirley J. Wells created this Life Tributes page to make it easy to share your memories.

Send flowers to the Wells family.