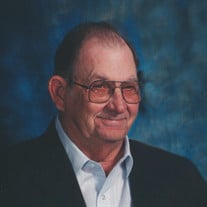 Sjoerd Bouma, 96, of Fremont passed away Wednesday, March 11, 2020, at the Mahaska Health Hospice Serenity House in Oskaloosa. Sjoerd Henry Bouma, son of Bert and Mattie (Van Arkel) Bouma, was born March 16, 1923, at the rural home of his parents near Wright, Iowa. In 1931, the family purchased a farm nearby in the Cedar/Fremont area. This farm became known as the home place and is still in the Bouma family until the present day. He was a 1941 high school graduate, and following his education joined his father on the family farm, raising crops and livestock. February 21, 1945, Sjoerd married Mary Louise Peters at the First Christian Church in Oskaloosa. In the early ’60s, he expanded his operation to include a second farm. He remained active in farming until 2014, and at the age of 91 years, turned the operations over to his son. In the 1960s, Sjoerd learned to fly, soaring above his farm and taking photos was one of his favorite past times. He also enjoyed a game of Four Point Pitch, when he could recruit enough players. Although he enjoyed his hobbies and his land, he truly cherished his family. He was a member of the Cedar United Methodist Church. His family includes his sons and daughter-in-law: Jim Bouma of Fremont, Iowa, and John and Wanda Bouma of Ottumwa; six grandchildren and their spouses: Brooke (Eric Kolsdorf) Bouma of Des Moines, Molly Larkin of Oskaloosa, Carrie (Santos) Rivas of Runnels, Chad Bouma of LaPlata, MO, Amy (Wes) Ryle of Kirksville, MO and Elizabeth Locke Rice of Sarasota, FL; and 15 great-grandchildren. In addition to his wife of 56 years, Mary, Sjoerd was preceded in death by his only sister, Betty Witzenburg. Funeral services for Sjoerd will be held at 10:30 a.m., Monday, March 16, 2020, at the Langkamp Funeral Chapel in Oskaloosa with Pastor Jim Eschenbrenner of the Northgate Alliance Church officiating. Burial will be in Forest Cemetery. Visitation will begin after 11 a.m., Sunday, at the funeral chapel; the family will greet visitors from 2-4 p.m. Memorial contributions can be made to Mahaska Health Hospice Serenity House in care of Mahaska HealthFoundation.

The family of Sjoerd Henry Bouma created this Life Tributes page to make it easy to share your memories.

Send flowers to the Bouma family.