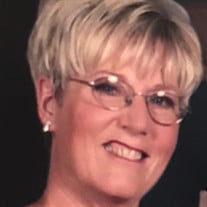 Stephanie Jane (Becker) Cornelder, 70, of Oskaloosa passed away unexpectedly Friday, February 2, 2018, at her home in Oskaloosa. Born December 28, 1947, in Shenandoah, Iowa, Stephanie was the daughter of Charles Wendell and Carmen Elizabeth (Loynachan) Becker. She attended school in Shenandoah through 1962, when the family moved to Oskaloosa. Stephanie was a 1966 graduate of Oskaloosa High School, and then furthered her education at William Penn College (Bachelor of Arts in Education and in Mathematics) in Oskaloosa, and Drake University (Master of Science in Education) in Des Moines. She taught physical education in Twin Cedars before beginning her career as a middle school math teacher in Pella. She retired from Pella Community Schools in 2012 after 25 years of service. Stephanie’s faith in the Lord Jesus Christ was the center of her life. She was a member of the First Presbyterian Church in Oskaloosa where she served as an elder, treasurer, Sunday school teacher, and was a member of the Presbyterian Women and church choir. Stephanie also served as the treasurer of the Des Moines Presbytery P.W. and as a member of the Budget and Finance Committee of the Presbytery. Stephanie was also the president of P.E.O. Chapter X and was especially passionate about educational scholarship for young women. Stephanie loved to be involved in the community, and in her retirement became a volunteer in the M.H.P. surgical area, for which she received the Governor’s Volunteer Award for the State of Iowa in 2016. Stephanie was an avid walker and bicyclist, and enjoyed horseback riding, gardening, reading, and opening her home to friends and family. In her retirement she made trips several times a year to visit Native American Presbyterians in different states, with many of whom she developed deep friendships, she did this with her dear friend Sharon Falck who also taught her how to quilt, a hobby that quickly became a passion for Stephanie. Stephanie will be missed by many loved ones and friends. She is survived by her husband, Hans of Oskaloosa; her daughter Kelsie (Eric ) (Graham) Dales and grandchildren Tyson and Mia of Fair Oaks, California; her “bonus” children David (Kristine) (Van Zante) Cornelder and grandchildren Elise, Rachel, and Josiah of Des Moines; Amy (Paul) (Cornelder ) Gordiejew and grandchildren Daniel and Lola of Boardman, Ohio; Mark (Sally) Graham and grandsons Nick and Jack of Riverview, Florida; Gary (Dawn) Graham of Oceanside, California; and Clifford (Gina) Graham, granddaughter Kyra, and great-grandson Josiah of Oceanside, California and granddaughter Brittany and great-granddaughter Rocklyn of Chico, California. She is also survived by her brothers Steve (Diane) Becker of Nolensville, Tennessee; and David (Cathy) Becker of Vicksburg, Michigan and their families. Stephanie was preceded in death by her parents. Visitation will begin Monday, February 5, 2018 at 10 a.m. at Langkamp Funeral Chapel; the family will greet visitors from 5-7 p.m. on Monday evening. Funeral services will be held on Tuesday, February 6, 2018 at 10:30 a.m. at the First Presbyterian Church in Oskaloosa with Reverend Donald Stribling and Reverend Jim Koopman officiating. A family prayer service will be held at 10:15 a.m. in the Fellowship Hall and burial will be at Forest Cemetery following the service. A luncheon will be provided in the church. Memorials may be made to the Becker Scholarship Fund at the First Presbyterian Church, which was started by Stephanie’s parents and provides scholarships to college students.

The family of Stephanie J. Cornelder created this Life Tributes page to make it easy to share your memories.

Send flowers to the Cornelder family.