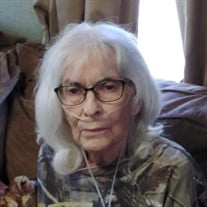 Sue Cary, 76, of Ottumwa passed away early Sunday morning, September 27, 2020, at her home in Ottumwa. Flola “Sue” Arminta Cary, daughter of Fred and Arminta (Jarvis) Downing, was born on October 25, 1943, in Bunch, a small hamlet in Davis County, Iowa. She attended school in Bloomfield. On November 16, 1963, she married Charles Lee Cary in Ottumwa. They made their home in Ottumwa, where Sue was a homemaker and raised their four children. In her free time, she enjoyed crafts, her vegetable garden, and, most of all, spending time with her grandchildren and great-grandchildren. Her family includes her children: Charles “Chuck” Cary, Edgar Cary, Debbie (Jim) Williams, and Cindy Cary, all of Ottumwa; two grandchildren and three great-grandchildren. She is also survived by a brother, Leonard (Bertha) Downing, of Ottumwa. In addition to her parents and her husband of 53 years, Charles, who died on March 17, 2017, she was preceded in death by seven brothers: James, Charles, and Francis White, Floyd, Frank, and Larry Downing, and an infant brother; and two sisters: Freda Six and Dixie Hedges. A graveside memorial service will be held at 2 p.m., Wednesday, September 30, 2020, at Shaul Cemetery in Ottumwa with Rev. Tommy Wilkins of the Bridge Church officiating. According to the rules put in place by the Iowa Department of Public Health, proper social distancing and appropriate personal protective equipment are advised for attending this public event. A formal gathering of family and friends will be held at a later date. Memorial contributions can be made to the family and a charity will be determined later. Langkamp Funeral Chapel & Crematory, Oskaloosa is handling Sue’s arrangements.

The family of Sue Cary created this Life Tributes page to make it easy to share your memories.

Send flowers to the Cary family.