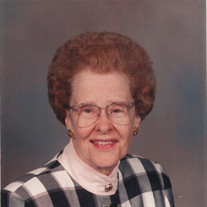 Sylvia Bruxvoort, 93, of Oskaloosa passed away, Tuesday, January 29, 2019, at the Northern Mahaska Specialty Care in Oskaloosa. Sylvia Bruxvoort, daughter of Guy and Tena Bouma Bruxvoort, was born January 7, 1926 in Oskaloosa, Iowa. She graduated from eighth grade in 1939, and in 1944, Sylvia began what would become a lifelong service, her career in nursing. She started that career as a nurse’s aide at Mercy Hospital in Oskaloosa. In September 1949, she began her high school education at the Ferris Institute in Big Rapids, MI; she graduated from there in 1951. In January 1952, she began her formal nursing education in the Practical Nursing Division at Grand Rapids Junior College and received her diploma in January 1953. Her first position as an LPN was with St. Mary’s Hospital in Grand Rapids, MI. In October 1956, she and a friend, traveled to California, where they worked for a year. She returned to St. Mary’s in Grand Rapids, where she remained for thirty-two years. She retired July 1, 1990 and in March 1992, she returned to Oskaloosa to be near her family. Sylvia was a member of the Bethel Christian Reformed Church in Oskaloosa and its Ladies Bible Hour. Her family includes her sisters: Mary Ann (Lawrence) Vander Molen of Pella; Joyce (Darrell) Cline of Oskaloosa; and Barbara Bruxvoort of Fort Collins, CO; her brothers: Marvin (Betty) Bruxvoort of Pella and Gerald “Jerry” (Shirley) Bruxvoort of Oskaloosa; two sister-in-laws Dora Bruxvoort and Reuvena Bruxvoort, both of Oskaloosa; and many nieces and nephews. Besides her parents, she was preceded in death by a sister, Doris Hessing; her brothers: Bernard Bruxvoort and Stanley Bruxvoort; a brother-in-law, John Hessing of Oskaloosa; and an infant twin sister, Dorothy Ann Bruxvoort. Funeral Services for Sylvia will be held at 10:30 a.m., Friday, Feb. 1, 2019, at Bethel Christian Reformed Church with Rev. Douglas Van Der Pol officiating. A Family Prayer Service will be held in the fellowship hall at 10:15 a.m. before the service. Burial will be in Forest Cemetery. Visitation will begin at 11 a.m., Thursday at Langkamp Funeral Chapel; the family will greet visitors from 4-6 p.m., Thursday evening. Memorials can be made to the Oskaloosa Christian School.

The family of Sylvia Bruxvoort created this Life Tributes page to make it easy to share your memories.

Send flowers to the Bruxvoort family.