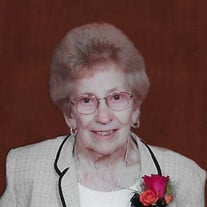 Beverly Paulson, 91, of Oskaloosa passed away Wednesday, February 20, 2019, at Jefferson Place in Pella, Iowa. Thelma Beverly Paulson was born, August 15, 1927, in Bristol, Indiana to Kenneth and Marjorie (Wise) Carmien. She was a 1945 graduate of Bristol High School. Beverly’s first job was with Conn Instruments, a manufacturer of musical instruments, in Elkhart, Indiana. She married her high school sweetheart, Edgar Eugene Paulson, November 20, 1949. Their first home was in West Lafayette, Indiana, where Edgar was a student at Purdue University, and Beverly worked as a secretary in the chemistry department. Edgar’s career as an engineer required moves to Mishawaka, Indiana in 1955, Allegan, Michigan, in 1965, and Oskaloosa in 1974. While they lived in Allegan, Beverly worked as a school secretary for the North Ward Elementary School, and when they moved to Oskaloosa, she was hired as the school secretary at Webster School under Principal Bob McCaulley. Beverly was a member of the Order of the Eastern Star when she lived in Indiana. After moving to Oskaloosa, she became a member of the Central United Methodist Church. In her spare time, she enjoyed knitting, sewing and caring for her grandchildren. Beverly’s family includes her husband of 69 years, Edgar Eugene of Oskaloosa; a daughter and son-in-law, Jeannene and Bruce Veenstra of Oskaloosa; two sons: Eric Paulson of Sparks, Nevada and Edgar Steven Paulson of Oskaloosa; seven grandchildren: Thomas Paulson, Kyle (Jacey) Veenstra, Kelly (Chris) Pierson, Jackie Anderson, and Ethan, Abigail, and Maggie Paulson; six great-grandchildren: Tegan, Everly and Bexley Pierson, and Katelyn, Kinzey and Kennedy Veenstra. In addition to her parents, Beverly was preceded in death by her three brothers: Kenneth, Jerry, and Jim Carmien. As was her wish, her body had been cremated, and a Celebration of Life Service will be held at the Kinsman’s Keep at a later date. Langkamp Funeral Chapel is handling the arrangements. Memorials can be made to the Hospice of Pella.

The family of T. Beverly Paulson created this Life Tributes page to make it easy to share your memories.

Send flowers to the Paulson family.