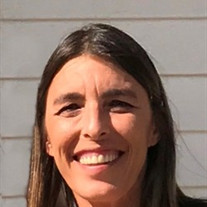 Tawnee Jenkins, 46, of Oskaloosa passed away Monday evening, August 21, 2017, at Mercy Medical Center in Des Moines, Iowa. Tawnee Lee Jenkins, daughter of Phyllis Ann (Palmer) Smith, was born February 19, 1971, in Osceola, Iowa. Early in her life, the family moved to Pella, Iowa where she attended Pella High School. Following her education, she married Charles Charbonneau, and to that union, one daughter was born. They later divorced. She married Curtis Jenkins, November 8, 1996, and to that union, three children were born. Tawnee was a stay at home mom; she loved having her children near and cooking for them. She also enjoyed flower gardening and landscaping. Her family includes her children: Ashley Marie Jenkins, Carley Lee Jenkins, Tasha Marie Jenkins and Zane Lee Jenkins, all of Oskaloosa; two grandchildren: Tucker and Carson Jenkins; a companion, Russ Parker of Oskaloosa; her siblings: Dust'n (Sara) Warburton of Pella, Rhonda Bustamante of Des Moines, and Jesse Smith of Des Moines, and several nieces and nephews. In addition to her mother, she was preceded in death by her husband of 17 years, Curtis on July 6, 2014. Funeral services for Tawnee will be held at 10 a.m., Saturday, August 26, 2017, at Langkamp Funeral Chapel with Pastor Mike Sereg of Central Reformed Church officiating. Burial will be in Kensler Cemetery south of Delta. Visitation will begin at 11 a.m., Friday, at the funeral chapel; the family will be present to greet visitors from 5-7 p.m. on Friday evening.

The family of Tawnee LeeAnn Jenkins created this Life Tributes page to make it easy to share your memories.

Send flowers to the Jenkins family.