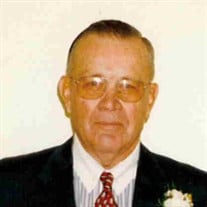 Ted Ver Steegh, 95, of Oskaloosa and formerly of New Sharon, passed away Thursday evening, October 8, 2020, at Mahaska Health in Oskaloosa. Edward Theodore (Ted) Ver Steegh, son of David Theodore and Edith Elizabeth (Cope) Ver Steegh, was born on January 6, 1925, in New Sharon, Iowa. He served in the United States Army in the Asian-Pacific Theater and was honorably discharged December 1946. He married Bertha Mae Criss, August 14, 1947; they made their home in rural New Sharon, where Ted farmed and was a Master Swine Producer. He retired from farming in 2008 but remained living on his farm until 2014, when he moved to Oskaloosa. He was a member of the Central Reformed Church, Prairie Knolls Country Club, American Legion, sold Cargill seeds, and served as Mahaska Farm Bureau President and chairman of the ASC committee. In his younger years, Ted enjoyed deer and fox hunting. He enjoyed coffee times with friends, tractor pulls, and card parties. Ted also enjoyed singing hymns. The Oskaloosa Care Center was home to Ted in the last few years of his life, and while living there, he frequently led the singing at the care center church services. Meditating on the words of a favorite hymn would be a tribute to him and his faith. Ted is survived by his daughter, Beth (Eric) Otto of Yorkville, Illinois; a grandson, Brent (Victoria) Otto of Yorkville, Illinois, and a granddaughter, Allison (John) Benedetti of Hoffman Estates, Illinois; a great-grandson and five great-granddaughters. His sister and brother-in-law, Anita and Frank Younkin of Glendale, Arizona, also survives. In addition to his parents, he was preceded in death by his wife of 62 years, Bertha; his daughter, Beverly Prine; an infant son, Frederick, his sister, Evelyn Dunnick and her husband Art; brothers-in-law, Ed and Paul Criss, and sister-in-law, Sylvia Cline; and a very dear friend, in his last years, Wilma Ver Steegh. Private graveside services were held for Ted at Friends Cemetery in New Sharon, Iowa, with Rev. Jon Nelson of Central Reformed Church officiating. A memorial service will be held at a future date. Memorial contributions can be made to Beth Otto to be used towards a memorial bench in New Sharon or to Mahaska Health Hospice Serenity House. Langkamp Funeral Chapel is handling Ted’s final arrangements.

The family of Ted Ver Steegh created this Life Tributes page to make it easy to share your memories.

Ted Ver Steegh, 95, of Oskaloosa and formerly of New Sharon,...