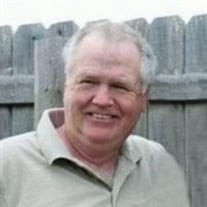 Terry Buffington, 68, of Oskaloosa, passed away Friday, November 5, 2021, at Mercy West Lakes Medical Center in West Des Moines, Iowa. Terry Lee Buffington, son of Floyd Earl and Roberta Marie (Johnson) Buffington, was born July 30, 1953, in Oskaloosa. He graduated from Oskaloosa High School in 1972. Early in Terry’s life, he became interested in carpentry and construction, so he began his life-long career in construction after high school. Initially, he worked for several companies, but eventually, he started his own business, Buffington Remodeling. He operated the business for over 25 years. Terry married Karla Rozenboom in January 1972, and to that union, Jennifer was born. They later divorced. Terry married Dianna Kay Allgood on July 7, 1984, in Columbia, Missouri. Terry enjoyed bowling and gathering with friends at the American Legion for Steak Nights in his free time. He enjoyed his grandchildren and never missed an opportunity to tease them. His grandson, Nicholas, worked with Terry in his business, and another grandson, Brock worked in Des Moines at a lumber yard; Terry loved dropping in on him to chat about the business. He was a past member of the Eagles and the American Legion. Terry’s family includes his wife, Dianna of Oskaloosa; his daughters: Jennifer Baker of Des Moines and Angela Carmer-Hansen of Oskaloosa; six grandchildren: Nicholas (Allie) Andrews of Ashland, MO, Audrianna (Curtis) Johnson of Omaha, NE, Raven McKenzie of Omaha, NE, Lexus Baker of West Des Moines, Leah Baker of West Des Moines, and Brock Baker of Des Moines; five great-grandchildren: Jaxon, Killian, Sebastian, Rylie, and Sullivan; a sister, Linda (Dean) Fisher of Carroll, and Shelly Buffington (Harp) of Columbus, OH; a sister-in-law, Sue Buffington of Oskaloosa; and a brother, Kip (Tammy) Buffington of Lincoln, NE. In addition to his parents, Terry was preceded in death by a brother, Jim. Visitation for Terry will begin at noon on Wednesday, November 10, at Langkamp Funeral Chapel & Crematory; the family will greet visitors from 5-7 p.m. As was Terry’s wish, his body will be cremated, and the burial of his ashes will be in Bellefountain Cemetery near Tracy, IA. Memorial contributions can be made to the Oskaloosa Constructions Trade Program at the Oskaloosa High School.

The family of Terry Buffington created this Life Tributes page to make it easy to share your memories.

Send flowers to the Buffington family.