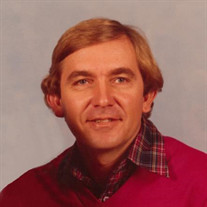 Terry Sheesley, 76, of Oskaloosa died peacefully on Sunday, July 14th, 2019, at Northern Mahaska Specialty Care Center after a lengthy battle with Parkinson’s disease. He was born on November 28th, 1942, in Oskaloosa, Iowa, the son of Max and Marjorie (Zach) Sheesley. Terry graduated from Oskaloosa High School in 1961. Following graduation, he attended Eastern New Mexico University twice for several degrees and graduated from Northern Missouri State University. Upon returning to Oskaloosa, he married Connie Ray and would have celebrated 51 years of marriage in August. Terry was a respected teacher at Oskaloosa High School for 34 years, taking his profession very seriously as well as a privilege, leading many students over the years through his creative and knowledgeable methods. He earned many honors and awards during his early years. He distinguished himself at the state level as a young golfer himself and also as a coach. In addition to Terry himself being an outstanding athlete, he instilled that dream into many young adults over the years. He was also a celebrated coach for 16 years for both basketball and golf, taking his golf teams to 11 Conference Titles, six teams to state, winning the 4A State title twice, and one team finishing 2nd once. Terry received a high honor by being elected to the Iowa High School Coaches Hall of Fame in 2012 for his golfing career. In addition to his enthusiasm for sports, Terry loved to read and write. He composed all of his research papers for his degrees on his manual Smith-Corona Typewriter, and he enjoyed using it long past the advent of computers. He cherished his ability to express himself through the written word, and even after his illness began taking its toll, Terry continued to practice his writing skills. For three seasons, Terry mowed at Forest Cemetery. During that time, he became interested in the history of some of the people buried there, taking the time to research their lives and write a book. He is survived by his wife, Connie, and his younger brother, Rob Sheesley of Des Moines, a sister and brother-in-law, Patt and Pete Bennett of Arizona, several cousins, as well as many multigenerational nieces and nephews. He was preceded in death by his parents and his beloved 7-year-old great niece, Alexandria “Lexie” Gaston, to Osteogenic Sarcoma (bone cancer) in 2000. Terry and Connie have attended the Nazarene Church for over 40 years. It was his faith that gave him the quiet courage that carried him through the years that he endured Parkinson's Disease. He will be greatly missed and was loved and respected by many. A Celebration of Life Service will held at 10:30 a.m., Thursday, July 18, 2019, at the Gateway Church of the Nazarene with Rev. Darren Melton officiating. Private burial will be in Forest Cemetery before the Celebration of Life Service. Open visitation will be held from 10 a.m. to 6 p.m., Wednesday at Langkamp Funeral Chapel. The family asks that in lieu of flowers, any contributions can be directed to the University of Iowa Stead Family Children's Hospital in Iowa City, Iowa, in memory of Alexandria Gaston and Terry Sheesley.

Terry Sheesley, 76, of Oskaloosa died peacefully on Sunday, July 14th, 2019, at Northern Mahaska Specialty Care Center after a lengthy battle with Parkinson&#8217;s disease. He was born on November 28th, 1942, in Oskaloosa, Iowa, the son of... View Obituary & Service Information

The family of Terry Sheesley created this Life Tributes page to make it easy to share your memories.

Send flowers to the Sheesley family.