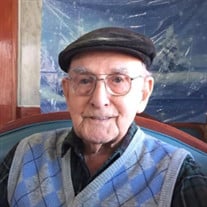 Teunis Jan Hol, 103, went to be with his Lord and Savior, Jesus Christ, on Thursday, May 5, 2022 at Mahaska Health Serenity House in Oskaloosa. Teunis Jan Hol, son of Cornelis and Antonia (De Greef) Hol, was born January 2, 1919 in Hemmen, Gelderland, the Netherlands. He served in the Dutch Army, later was part of the Dutch Resistance during World War II, and lastly served in the Twenty-First British Army in France. He came to America on a commercial ship in October of 1947. After coming to America, he worked on a farm with cousins Marion and Everett Hol, near Peoria, for a year. On October 21, 1948, he married Elizabeth DeRonde at her sister’s home in Mahaska County. He worked as a farmhand for Hank Van Weelden for one year and then rented his brother-in-law, Jake DeRonde’s farm, for two years. On April 20, 1953, one of the proudest days of his life, Teunis became an American citizen. He rented a farm south of Rose Hill for eight years. From 1960-1971 Teunis owned his own business, Hol Feed and Seed. From 1971-1987 he delivered Winnebago motor homes all over the United States, including two trips to Alaska. The last four years he was able to take his wife, Elizabeth, with him. Elizabeth went to be with the Lord in 2005. Teunis lived on his own until February of 2020 and then moved to White Oak Estates. Teunis was a member of the Bethel Baptist Church. During December of 1979 Teunis was saved and on March 23, 1986 he was baptized at Bethel Baptist Church. He was a Prayer Warrior and loved to share the Gospel with those he came in contact with. He also enjoyed coffee time with his buddies. Those left to cherish his memory are his three children, six grandchildren and twenty great-grandchildren His sons and families: Cornelis and Lois Hol of Oskaloosa Travis and Melissa Hol, Pella, IA Kaiden and Taryn Trenton and Lydia Hol, Des Moines, IA Clara and Ruby Katie and Chad Brooks, Ankeny, IA Adeline, Emilia and Tate David and Gladys Hol of Oskaloosa Chad and Amanda Hol, Harlan, IA Kaelyn, Chloe, Kirkland, Cathryn, Kendall, Cora, Karis, Cuyler Christina and Josh Hixson, Carlisle, IA Lilybeth, Jaiden, Ember, Jace Corrine and Luke Wyma, Pella, IA Charlotte And a Daughter: Dorothy Vander Molen of Pella, IA In addition to his parents, Teunis was preceded in death by his wife, Elizabeth, an infant daughter, Alida Lou, an infant granddaughter, Jasmine Hixon, one brother, Hermanus (and Ma) Hol, and two sisters; Margaretha Hol and Pieteunella Hanhard. Funeral services for Teunis will be held, 10:30 A.M. Tuesday, May 10, 2022 at the Bethel Baptist Church in Oskaloosa with Pastor Chad Hol, Pastor Trenton Hol and Pastor Ronnie Hemsworth officiating. Visitation will begin at 1:00 P.M. Monday, May 9, 2022 at Langkamp Funeral Chapel and Crematory, with the family present from 4 – 7 P.M. Memorials may be made to the Bethel Baptist Church or the Mahaska Foundation for the Hospice Serenity House

The family of Teunis Jan Hol created this Life Tributes page to make it easy to share your memories.

Send flowers to the Hol family.