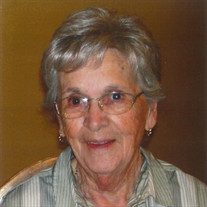 Theda Elliot Ryther, 93, of Oskaloosa, passed away Friday, April 9, 2021, at Crystal Heights Care Center in Oskaloosa. Theda Marie Elliot Ryther, daughter of Charles J. and Charlotte (Broyles) Elliott, was born on September 5, 1927, in Trenton, Missouri. Theda attended school in Trenton and later earned her G.E.D. in 1955. Theda was married, at age 16, to Gavin Asher, and to this union, five children were born. They later divorced. She married Carlos J. Ryther on March 18, 1954, in Chillicothe, Missouri, and to this union, two children were born. Theda and Carlos moved back and forth between Oskaloosa and Missouri until 2004 when they stayed here permanently. In addition to raising her children, Theda worked as a waitress, owned Molly’s Café, worked at lady’s ready to wear, was a bookkeeper at Lampson Mobile Home Park for 12 years, and D.R.S. for 20 years. After her retirement in 1995, she enjoyed knitting, crocheting, and quilting. She taught Sunday school at the Bethel Baptist Church, where she also sang in the choir. Theda’s family was the joy of her life, and spending time with all of them and babysitting her great-grandchildren were some of her greatest treasures. After learning how to quilt during retirement, she loved making quilts for mission trips. She was a member of the Calvary Bible Church. She was a past president of the Oskaloosa Business and Professional Women’s group, B.P.W., Mahaska Quilting Guild, and participated in Thursday morning quilting at the Calvary Church. Theda’s family includes her five daughters: Charlotte (Rick) Caves of Oskaloosa, IA; Janice (Richard) Burman of Peru, IL; Connie Slechta of Sigourney, IA; Carla (Charles) Ridenour of Oskaloosa, IA; Vicki (Jeff) Glandon of Macon, MO; a son, Lee (Marge) Asher of Grinnell, IA; a stepson, Larry (Marlene) Ryther of Windsor, MO, 15 grandchildren; 29 great-grandchildren; a stepdaughter Marsha Van Wyk of Nashville, TN and a stepson Jerry (Linda) Van Wyk of Springfield, MO. Theda was preceded in death by her husband, Carlos; a son, Elliott Lynn Asher; her parents; six brothers: Gerald Elliott, Willard Elliott, Thomas Elliott, Donald Elliott, Everett Elliott, and Carol Elliot; three sisters: Beatrice Emery, Dorothy Poage, and Margaret Callen; and several nieces and nephews. Funeral services for Theda will be held at 1:00 p.m., Tuesday, April 13, 2021, at the Calvary Bible Church, with Reverend Doug Smiley officiating. Burial will be in Evergreen Cemetery in Leighton, IA. Visitation will be held Monday, from 11 a.m. to 7 p.m., with the family being present from 5 p.m. to 7 p.m., at the Langkamp Funeral Chapel. According to the rules put in place by the Iowa Department of Public Health, proper social distancing and appropriate personal protective equipment are advised for attending this public event. Memorials can be made to the Calvary Bible Church.

The family of Theda Elliott Ryther created this Life Tributes page to make it easy to share your memories.

Send flowers to the Ryther family.