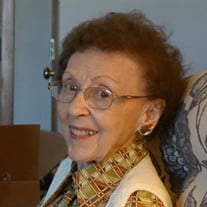 Thelma Ailene Boles Greenhalgh, age 99, of Oskaloosa, passed away Monday, December 27, 2021, at Mahaska Health in Oskaloosa. Thelma was born on January 17, 1922, in Beacon, Iowa, to Frank E. and Mable (Okey) Boles. Her mother died when she was two weeks old, and she was raised by her maternal grandparents, Lewis Fletcher and Effie Okey. She graduated from Oskaloosa High School in 1941 and was employed by McGregor Furniture Co. as a secretary until her marriage to Jesse Leland "Pete" Greenhalgh on June 1, 1942, in Kirksville, MO. She was an office clerk for Auto-Owners Insurance Company in Oskaloosa from August 1958 to September 1967. At that time, she and her husband, Jesse, and son, Robert, moved to Davenport, Iowa. She was employed at J.I. Case Co. in Rock Island, IL as a secretary and later at Bendix Corporation (Litton Systems) in Davenport from 1969 to September 1985, when she retired as an executive secretary. She and her husband moved back to Oskaloosa in October 1994. Thelma is survived by her daughters, Janet (Virgil) Behrens of Knoxville and Phyllis Elaine (Leslie) Guthrie of Thornton, CO, and a son, Robert (Mary Walker) Greenhalgh of Gallup, NM; five grandchildren: Kurt (Nicole) Behrens of Sigourney, Lisa (Wesley) Kennedy of Black Hawk, CO, Kristin Holdeman of Millerton, IA, Kimberly Guthrie of Thornton, CO and Jennifer Greenhalgh (Andrew Simpson) of Kyle, TX. She was blessed with 18 great-grandchildren and eight great-great-grandchildren. A half-brother, William Boles of Lamar, MO, and a half-sister, Mary Tidd of Bel-Aire, KS, and other relatives also survive her. In addition to her parents and grandparents, Thelma was preceded in death by her husband, Jesse, in 2013; a son, Larry Allan Greenhalgh; a son-in-law, Virgil L. Behrens; an uncle, Clayton Okey, and an aunt, Elsie (Okey) Allsup Holliday, both of whom were raised with her as brother and sister. Also preceding her death was her step-mother, Artie May Boles, a half-brother, Frank E. "Eddie" Boles, Jr., and a half-sister, Diana Vest. Thelma's funeral services will be held at 1 p.m., Thursday, at Langkamp Funeral Chapel with Rev. Chad Lierman of Central United Methodist Church officiating. Burial will be in Bellefountain Cemetery near Tracy. Visitation will be held from 10 a.m. to 6 p.m. on Wednesday.

Thelma Ailene Boles Greenhalgh, age 99, of Oskaloosa, passed away Monday, December 27, 2021, at Mahaska Health in Oskaloosa. Thelma was born on January 17, 1922, in Beacon, Iowa, to Frank E. and Mable (Okey) Boles. Her mother died when she... View Obituary & Service Information

The family of Thelma Greenhalgh created this Life Tributes page to make it easy to share your memories.

Send flowers to the Greenhalgh family.